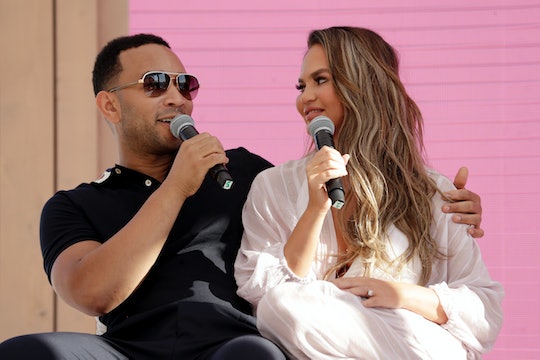 Chrissy Teigen Gets Real About Needing Help As A Working Mom

It seems like Chrissy Teigen has about 7,000 jobs on the go all the time. Alright that's an exaggeration but she is a busy lady. Between filming her new series Bring The Funny, writing cookbooks, partnering with Target to create gorgeous cookware, and please never forget her upcoming series Chrissy's Court (where she will pass judgment on petty disputes Judge Judy-style), Teigen has a lot on her plate. Oh yes, and she's also raising two children... how does she do it all? Well, you don't have to wonder because she'll tell you. Teigen credited her support system as a working mom in a recent post on Twitter, and it was an important reminder that no one can pull it off alone. Not even Chrissy Teigen which is really saying something.

The Cravings: Hungry For More cookbook author is wife to EGOT-winner John Legend and mom to two of my favorite kids on the internet, 3-year-old daughter Luna and 1-year-old son Miles. While she definitely gives the impression of having it all (please see all of the photos from her recent family trip to Thailand on her Instagram feed as Exhibit A), Teigen is not in the habit of disseminating and pretending her life is perfect. Far from it actually; as anyone who follows her on social media knows, her best material comes from her near-painful honesty about her life. So when she was asked in a recent tweet to open up about what it's like to work while pregnant and after her babies were born, you had to know her response would be, above all things, honest.

The Lip Sync Battle host could have answered any number of ways, of course. She could have told people that she was just very pulled together in general, that parenting happens to come more easily to her, or some other story that would ultimately make those of us who struggle as working parents feel even worse. Instead, she got real about her privilege in the responding tweet, something that's not all that easy to do:

I have HELP and a half. That’s it. There is no way I could have done it without it. I’m so lucky to have it and I don’t know how anyone else does it. I have so much respect for all of you. (also our amazing set provided an amazing daycare room).

Teigen admitted she has a whole lot of help, and while she didn't name anyone specifically I think it's safe to say she includes her husband on that list as well as her mom, Vilailuck Teigen, who lives with the family full time. But Teigen also noted there was a great day care room on set at Bring The Funny, and I'm really hoping every employer out there reads that and jumps on the trend. Because having your little ones close by makes everything easier.

Teigen clearly subscribes to the old adage "It takes a village to raise a child," which is great. Sure, I know that people will call her out because she has a load of money and can hire people to do whatever she asks, but the reality is all moms out there need help. Working or not, married or not, you need someone who is there for you and your kids. Because no one can make it alone in this world, especially not when you are trying to parent little people.

Seriously, no one. Not even Chrissy Teigen.