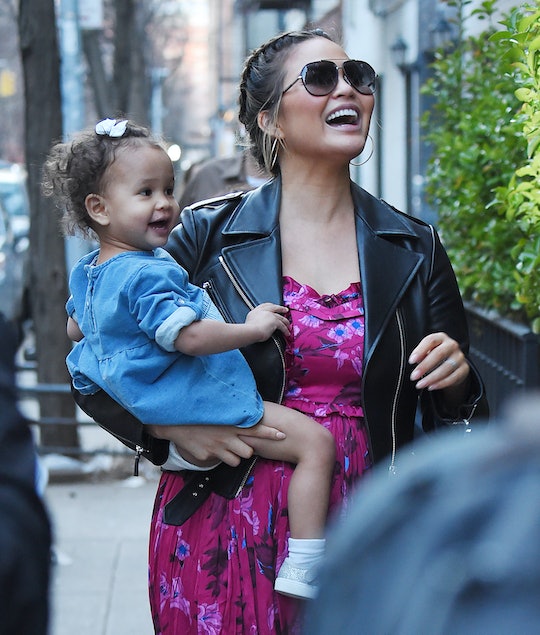 Every December, kids all around the world pen a special and detailed note to send off to the North Pole. And lucky for us, Chrissy Teigen captured her own daughter writing a letter to Santa this year in an adorable video shared on Instagram. Not only is it sweet to watch, but simply trying to decipher what it was that she wants for Christmas should be worth hours of entertainment value.

The Cravings cookbook author and her husband, EGOT-winner John Legend, are parents to 3-year-old daughter Luna and 1-year-old son Miles. While Miles might be too little to sit down and write a letter to Santa with his wishlist this year, Luna certainly seems to believe she has it under control. In an Instagram video Teigen shared on Sunday evening, the charming 3-year-old sat down to pen a letter to the big man in red that was actually more of an audio note than a letter. I mean, she was mostly taking a pink Sharpie to her paper and making little hearts. But, if Teigen can go ahead and send Santa Claus the video of her letter-writing, she should be in good shape this Christmas.

Loosely transcribed, here is what Luna had to say to Santa Claus: "Dear Santa, give me a ballet dancer because I sleep with her every day. Love, Luna Stephens — every night."

So let's unpack this: it seems Luna would like a ballet dancer, although it sounds like she already has one since she is sleeping with her every night. I'm going to go out on a limb and assume she means a doll and isn't trying to get Santa to bring her, say, Misty Copeland from the American Ballet Theater; she surely knows that Santa can't just give a kid humans for Christmas. If he could, Ryan Gosling would have been living in my spare room years ago.

Luna's letter to Santa brings up a few questions but it also answers one big one: it seems that she believes in Santa Claus. In a recent interview with People, Legend cast doubt on his daughter's belief in Santa Claus when he said, "Luna, she talks about Santa and I don’t know if she really believes in Santa or if she just does it to play along with us.”

Whether or not Luna will receive that mystery ballet dancer from Santa is anyone's guess at this point. The important thing is that she believes it will happen. Also that she loves Santa every night. This is important, too.