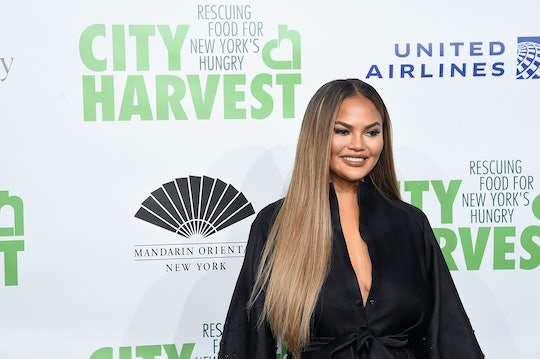 Do you know what's really sad? When life gets so bad that you end up getting overwhelmed to the point where you can't remember all of the bad things. And then you remember and you are stuck with that gut-sinking feeling like Oh yeah, that. This is pretty terrible and I also suspect, what with the world seemingly crumbling around our ears on the daily, it's happening more often than we might realize. I mean, Chrissy Teigen forgot Mike Pence existed recently, despite the fact that she used to tweet about him regularly. Sometimes our brains can only handle so many problems at once, I guess.

The social media mainstay was up to her usual antics on Tuesday; tweeting about cold gravy on airplanes and the excellent lighting on The Tonight Show with Jimmy Fallon. She was presumably also spending time hanging out with her husband, EGOT-winner John Legend and their two adorable children, 3-year-old daughter Luna and 1-year old son Miles. Although I have no way of knowing, I can picture her happily going about her day while this thing sort of niggles at the back of her mind. Something unpleasant she is forgetting but can't quite put her finger on. What could it be?

Oh yes. Vice President Mike Pence. She forgot he was a thing.

This must have been a bit of a jolt considering the Cravings: Hungry For More cookbook author and Vice President Pence have something of a history. Back in 2016 when Pence was still the governor of Indiana and Donald Trump was not even the president at all, Teigen was in the news for mocking Pence' performance during the vice presidential debate with Hillary Clinton's running mate Sen. Tim Kaine. At the time Pence was attempting to defend some of Trump's outlandish statements, and Teigen noted he was having a bit of a time with it.

These two clearly have something of a social media history, which is the only history that should really matter. And yet here is Teigen, on a Tuesday in June, trying to remember if it's Mike Pence or Matt Pence.

Obviously everyone on Twitter was just delighted to find that Chrissy Teigen had totally forgotten Mike Pence existed; especially since June is Pride Month and Pence has been known to be pretty anti-LGBTQ rights in the past; his wife Karen Pence recently took a teaching position at an anti-LGBTQ school, as per BBC News.

It really says a lot about the world we are living in that Chrissy Teigen could forget someone like Mike Pence. Because she is definitely someone who stays involved in politics and current events.

But I guess sometimes... sometimes our brain can only hold so much negativity. We can't just keep thinking about Mike Pence 24/7 after all; that's too much to ask of any human.