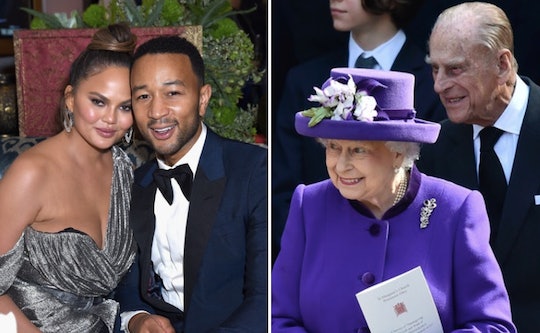 Chrissy Teigen & John Legend Went As Royals For Halloween, But Then Pulled A Total Parent Move

I always think I'm going to love Halloween parties... until I get there. Then I realize I'm a naturally lazy person who is generally too tired to be hanging around with a bunch of cool people in costume and I sneak home to enjoy a great night in. But hey, at least I made it to the party for a minute and got my photo, right? That means I'm doing just slightly better than some. This year, Chrissy Teigen and John Legend dressed up as an iconic royal couple for Halloween and then just stayed home because they were exhausted from living their best lives. And I totally relate.

The Cravings: Hungry For More author and her EGOT-winning husband were clearly ready to get into the Halloween spirit on Wednesday with their costumes. And the pressure to put together something spectacular was probably especially high for Teigen and Legend, who have become somewhat famous for being seriously original and over-the-top. And I have to tell you, their costumes certainly didn't disappoint.

This year, they dressed as Queen Elizabeth II and her husband Prince Phillip — so perfect considering how obsessed we all are with the royal family these days. Teigen shared some great glimpses of their costume on her Instagram Story, which was helpful since they apparently never bothered leaving their home.

In a video, the couple can be seen enjoying their costumes and getting into character, with Legend worrying that his hair wasn't quite accurate enough for Prince Phillip. Not to be cruel here, but he was right to worry. Prince Phillip pretty much has no hair at all, but who is going to fuss over that? I mean, the guy is 97 years old, what can you expect?

After parading around in their cool costumes for awhile, the couple admitted defeat. Despite the fact that they were apparently invited to a party, they ended up just staying home dressed as Queen Elizabeth and Prince Phillip.

As Legend said in one video on his wife's Instagram Story, "We both worked all day and we're just too exhausted. We did it for the 'gram."

Entertainment Tonight reported that the two were expected to go to Kendall Jenner's Halloween party before pulling a total parent move and copping out. Although that being said, Teigen did share a video later in the evening of a group of royal-themed revelers exiting an elevator. So maybe they went for like a second and then headed on home?

As for their two kids, 2-year-old daughter Luna and baby son Miles, what were they up to when their parents were dressing up for Halloween? While Miles might be too little to wear a costume, Luna had two.

Earlier this week, Legend shared a photo of himself dressed as Prince Charming (they really are serious about that royal love, I guess) and carrying Luna dressed as a princess on his shoulders.

How things change from one year to the next, especially when you have a second child. Last year the family went full Copacabana as Teigen dressed as Carmen Miranda, Legend was Groucho Marx, and 1-year-old Luna was a cute little pineapple. And they actually left the house, as ELLE reported.

Personally I prefer the whole dressing up as royalty and then staying home thing. It comes across as more on brand for parents of two with multi-faceted careers. And it makes me feel better about my own life choices.