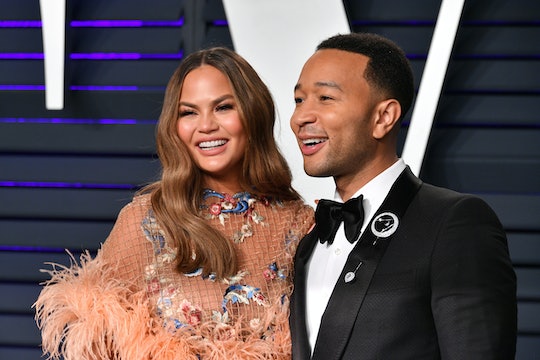 The transition from crib to toddler bed can be a tough one. Little ones can struggle to understand the move to a bar-less sleep habitat, but there are some steps that parents can take to make it a little easier. Recently, John Legend and Chrissy Teigen moved Luna to her "big girl bed," and their Instagram videos of the process include some helpful techniques that any mom or dad can put to use. And I don't know about you, but if there is any set of celebs whose parenting I'd like to model, it's those two.

Teigen and Legend posted a couple of videos to Instagram on Thursday that show their daughter Luna Simone moving into her very own bed, as People reported. Luna was adorably excited about the promotion, but noticed that it was lacking a couple of must-haves from her crib. Fortunately, she was able to fix the problem and get settled in just fine.

The first video shows Legend presenting Luna with her new bed, saying, “This is where you’re going to sleep from now on.” Teigen helped set the mood, asking Luna, “Isn’t it so pretty? You want to get up there?” In response, Luna headed over to the bed. However, she paused on her way up and walked back down to where her stuffed animals were sitting in the room. “Why you take these out?” she asked mom and dad, before grabbing her friends. The second video shows her in bed with the whole gang — including her toy bunny, teddy bear, Paddington bear, and Tiana doll — getting nice and cozy.

Stifling their laughs, Luna's parents (and grandma Vilailuck Teigen) reassured her, explaining that the stuffed animals could move into her toddler bed too. "Whatever you want to put in your bed you can put in there,” Legend said in the video before helping Luna arrange all of the toys in her bed.

Along with being really sweet, the two videos provide some helpful techniques for getting a toddler to sleep in their own bed. While there is no required age for moving children to their own bed, Deborah Lin-Dyken, pediatric sleep disorders expert, explained on Baby Center that most kids around Luna's age are ready to make the transition:

There's no set time when you have to replace your child's crib with a regular or toddler bed, although most children make the switch sometime between ages one-and-a-half and three-and-a-half. It's often best to wait until your child is closer to three, since many little ones just aren't ready to make the transition. Of course, you'll need to move your toddler to a bed when he's simply too big or too active to sleep in a crib anymore.

Along with finding the right age for a big bed, parents can work to make the transition as smooth as possible. As Very Well Family explained, making the transition gradual — i.e. spending time in your child's room to get them acclimated before they go there for the whole night — and keeping the bedtime routine the same as before are two important steps. Additionally, parents should make a big deal out of the transition and celebrate the move like Legend and Teigen did in their video, according to Raising Children.

Another thing that Luna's parents got right: letting her bring her stuffed animals into her new bed with her. Very Well Family reported that bringing "treasured items" into your child's room and bed with them is a great place to start the transition process.

Unfortunately for Teigen and Legend, moving a toddler into his or her own room isn't a "one and done" kind of a transition. Dana Obleman, founder of Sleep Sense in Vancouver, an organization that assists parents who are struggling with sleep issues, told Today's Parent that parents should expect setbacks during this time:

The first few weeks, the novelty of being in a bed usually keeps the child there. Then he realizes, ‘Hey, I can get out of this bed and I could go look for Mommy.’ At that point, you’ll get a little midnight visitor.

As cute as your little visitor may be, Obleman said it's important to consistently and gently return her to bed. She also recommends that parents help their child get used to sleeping in his own room by hanging around for a few nights. “I suggest parents sit beside the bed for three nights, then move the chair a bit farther away, and keep doing it until they are out of the room,” she said. But don't get in bed with them. “You want the child to practice going to sleep on his own.”

Moving a toddler to their own bed is a big deal. It's an exciting milestone and parents have every reason to celebrate. Congrats, Luna! And, congrats to John and Chrissy for another parenting win!