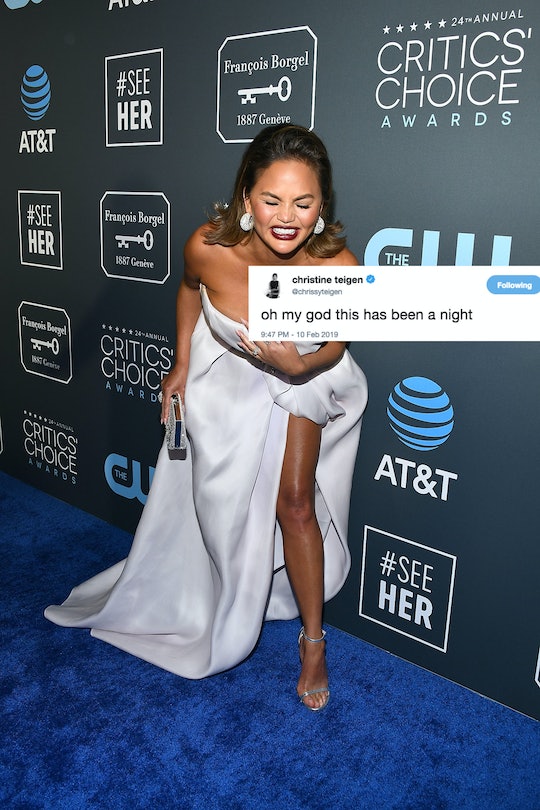 Chrissy Teigen Live Tweeted The Grammys, & It Was Even Better Than The Show

Chrissy Teigen is pretty much known for the way she tweets — she's relatable, she gives us an intimate look at her life, and she's straight up hilarious. I don't know a single person who doesn't think of Teigen as their own BFF, but she really hits her Twitter stride when it comes to awards shows. On Sunday, Chrissy Teigen live tweeted the Grammys and honestly it was the perfect commentary for the show. Like, can she just host the whole thing next year?

It started with a picture of John Legend and the note that they weren't going to be attending the Grammys because now that Legend has an EGOT, "EGOT lazy," she wrote. But y'all — Chrissy was just getting started with the jokes. She then shared a "not-going-to-the-Grammys" makeup tutorial "if you are so bored you wanna die" that had her with wet hair and wearing... a towel. It didn't take long for someone to join the fun and tweet, "Who did your towel this year, Chrissy?" To which of course Teigen responded to in true Chrissy fashion — with another absolutely relatable joke.

(Is it weird to be excited Chrissy Teigen shops where you shop? This is like Cardi B saying her baby wears Target clothes and now I think we're all BFFs.)

Wondering how all the fun got started? Teigen did tweet, "I have had...4 wines," but she also had some company at her own Grammy watching party. Jesse Tyler Ferguson was there to play "babysitter" and she shared a perfect video of Ferguson holding her baby son Miles as he danced in front of the TV during Cardi B's performance. Comedian Neal Brennan was also there to enjoy the fun — in one hilarious video, Teigen is sitting on Legend's lap and asks Brennan what it is he hates about musicians. He says the "one thing" he hates is how they start dancing at each other when they have nothing to do on stage, and the laughter coming from Teigen and Legend is just contagious. Honestly, they look like so much fun.

But besides tweeting about her company, Teigen also shared some tweets as she watched the show. She, like the rest of us, was absolutely blown away by Cardi B and Miley Cyrus. So much so, that after her tweets and a few more videos, she hilariously wrote that John was going to have to take her phone for the night.

I mean, I'm not saying that Teigen would get the same things out of our friendship that I would, but I think we'd have a hilarious time together. I also have two children, enjoy drinking a lot of wine, and screaming at the TV. And I also want to be really good friends with Jesse Tyler Ferguson, who appeared in a second video on Teigen's timeline dunking a tiny lollipop into a little plastic toilet.

Forget Clive Davis' Grammy Party — I want to be where Chrissy Teigen is.