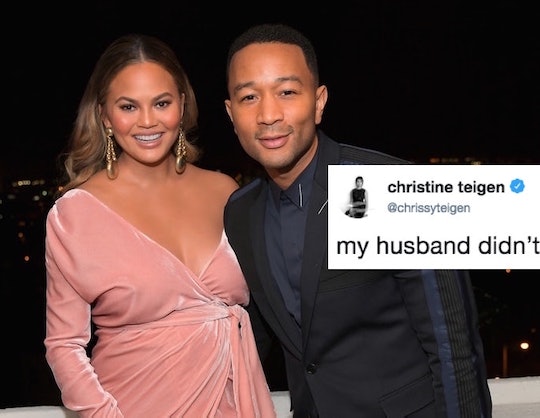 Deciding whether or not to take your partner's name after tying the knot is a very personal decision. And since it's 2018, certain traditions and rules that come with marriage are quite different than they were decades ago. As such, more and more women may opt to keep their own last names for a variety of reasons and, perhaps more importantly, it's really no one's business why. But since someone threw the question out there, Chrissy Teigen's answer for why she didn't take John Legend's last name was of course hilarious, but also perfectly (and hopefully) shut down this archaic argument as a public discussion.

Responding to a tweet that went viral many, many months ago, Teigen answered the question on Thursday. "I'd really like to hear the reasoning behind women who won't take their husband's last name," one Twitter user asked back in August 2017. The tweet has gotten over 6,000 responses since it was initially posted and the replies have ranged from sincere to outrageous.

But after Teigen found the tweet, she shared her answer with eight simple words and the 32-year-old mama effectively shut down the initial question. "My husband didn’t even take his last name?" she wrote, which is also true.

While the world may know her husband as John Legend, music extraordinaire, that isn't actually his real name; nope, Legend is not his real last name. A quick Google search will inform you that the Grammy-winner's full, real name is John Roger Stephens. So, the cookbook author's answer was hilarious and oh-so-Chrissy Teigen.

Why would she change her last name if her husband doesn't even use his real one, right? But, of course, that wasn't the only answer Teigen gave for keeping her own last name. After another Twitter user got chimed in about Teigen not taking Legend's last name and somewhat demanded she to explain herself further, she hit back with the best answer.

"You’ll never understand the simple reason of 'because I don’t want to'?" she wrote.

Don't worry, I'll give you a minute if you need to recover from that sick burn.

Good? OK, let's move on. The fact of the matter is that deciding whether or not to take your partner's last name when you get married is a pretty big decision, and it isn't something that's universal either. Plenty of women decide to keep their own names when they marry or use a combination of the two. According to a 2015 report from The New York Times, "Roughly 20 percent of women married in recent years have kept their names." So, no, Teigen's decision to keep her last name is not uncommon; it's something many women decide to do.

In an article published in 2014 by HuffPost, one woman explained her own decision, saying that it wasn't easy. "It was a very hard decision for me, wrought with turmoil around self-identity and feministic values. In the long run, tradition won out, but I still don’t feel confident with my decision." Another woman also told HuffPost that she and her husband both actually changed their names to form a new identity together.

Of course, deciding whether you'll take a different last name when you get married is totally up to you and you don't owe anyone an explanation, which Teigen perfectly expressed. Oh, and the one and only Cher got in on the discussion, too.

Really, is there anything better than two total queens coming together to take down the patriarchy? Doubtful, but maybe we should ask a man's opinion first, just to be sure?