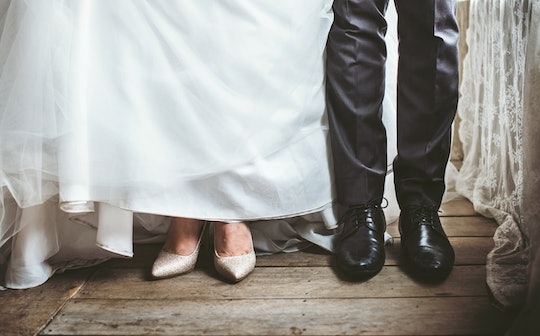 Deciding whether or not to take your partner's name when you get married is a pretty big decision, if only because your more traditional family members might raise an eyebrow if you or your spouse chooses to keep their own. Well, it looks like those traditionalists might be onto something, since a new study found that taking your partner's name in marriage can affect the power dynamic in a relationship. Researchers out of the University of Nevada conducted a three-part study in the United States and United Kingdom and concluded that when a man's wife doesn't take his name, he's perceived by others as less powerful and submissive.

Rachael Robnett, the lead author on the study, said in a statement, according to Springer Nature, "The marital surname tradition is more than just a tradition. It reflects subtle gender-role norms and ideologies that often remain unquestioned despite privileging men." Which just means that everyone should start changing how they think about gender roles, since none of this would happen if people weren't stuck thinking in the gender binary.

Robnett and her colleagues ran three experiments. In one, they asked undergraduate students to describe a man whose wife had kept her own surname. They used all of the characteristics that are normally associated with the female role, such as being nurturing, kind, and attentive, according to Springer Nature. The woman in those relationships were also seen as having the upper hand in the relationship.

In another, they examined how people who already ascribed to traditional gender roles or held sexist views responded to a fictional marriage story. According to the study, those who were normally antagonist towards women believed that a man who "let" his wife keep her own name was disempowered, which is pretty sad, since marriage is supposed to be about teamwork.

Robnett said in a press release for the study, “This study joins several others in alluding to a link between traditions in heterosexual romantic relationships and power structures favoring men." The study shows that people who oppose women keeping their name are fearful for the right reasons: It does mean that people will start to perceive the woman as not just equal to a man, but more powerful. And that will just never do, right? (Obviously, I'm kidding. People really need to get a grip when it comes to women's equality.)

According to a 2011 study, 50 percent of Americans believe that a woman should be required to take a man's name and 90 percent of American women actually do, as ABC News reported. An entire 10 percent believe that a woman not taking her husband's name isn't as "dedicated" to the marriage, according to the outlet, which is totally ridiculous. In many countries, it's illegal to change your name, even after marriage, so it's not like taking or not taking a man's name has anything at all to do with love.

It's scary to think that people still believe that there has to be a person in charge and someone who takes a submissive role — why can't we all share the power? It's a concept that so many people seem to still have trouble understanding.

While American women might have had to take their husband's name back when they couldn't own property, open a credit card without their husband around, or vote, none of that is true anymore, so there's really no reason to give up one's name unless they truly want to. Although there's a good argument to be made that it's nice if your kids all share the same last name. But there are tons of families out there who use a hyphen for that, and the world didn't self implode.

Kim Kardashian, for example, famously didn't take her first husband's last name for business reasons, though she uses her current husband's last name. Beyoncé was dragged by feminists back when she got married for taking on Carter as one of her last names, though there were rumors that JAY-Z also changed his name, which has never been confirmed. But that would be awesome if true, right?

If you really want a family to all share the same name, it should be a family decision and it could make sense for each partner to add a name to their IDs. Really, it should be up to each person and couple to decide what they want to do about their last name when they get married. But it shouldn't make you a bad "feminist" if you use a man's name or mean that you're emasculating a guy for not taking it. Either way, it's still something that couple's should take seriously, since it apparently still matters out in the real world.