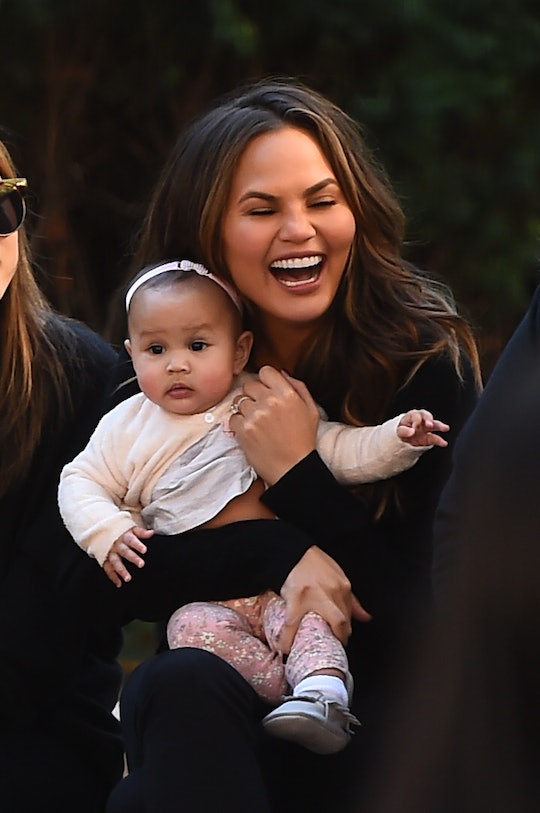 While getting candid with fans in a lengthy Q&A over Twitter, Chrissy Teigen discussed how her daughter Luna got her name. As it turns out, Teigen and husband John Legend, like many parents, didn't settle on a name before their baby girl arrived. In fact, Teigen has revealed it took a few days, and the moon, for Luna's name to make itself clear.

Teigen revealed to fans Sunday that Luna's name wasn't pre-determined before her birth in 2016. Instead, the model and television personality admitted it took her and singer John Legend a few days to settle upon a name for their now 3-year-old daughter. "Luna's name we didn't think of till 2 days after she was born," Teigen tweeted in response to a question regarding where she got her children's names from.

The mom of two shared that the couple drew inspiration for Luna's name from the natural world around them, mainly the moon. "It was about to be a red moon and the sky was incredible," Teigen revealed. "I always had a different name in my mind, though."

Interestingly, Sunday wasn't the first time Teigen has talked about the journey to finding Luna's name. In a February 2018 interview on The Ellen DeGeneres Show, Teigen said her general love for all things space also contributed to her daughter's name. "I have this love for space," she said after describing the Blood Moon that happened shortly after Luna's birth. "I think about space camp all the time and my days at space camp as youngster and I just thought Luna was perfect."

While Luna's first name was inspired by nature, her middle name — Simone — is meant to be a nod to one of music's greats. Last year, Legend told Glamour that part of his daughter's name was a reference to soul singer and civil rights activist Nina Simone. "We named our first daughter Luna Simone Stephens, and every name we give to our kids will have a little bit of musical history to it," he told the magazine.

Roughly two years after Luna's birth, Legend and Teigen continued their tradition of weaving musical history into their children's names when they named their son Miles Theodore. And while the boy's first name is a nod to jazz musician Miles Davis, both Legend and Teigen have both separately admitted that their son immediately seemed to look like a Miles.

"Miles came out such a miles," Teigen tweeted Sunday, easily solving that mystery.