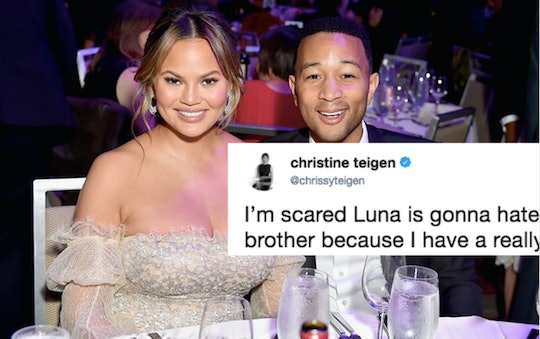 Chrissy Teigen, everyone's favorite cookbook author, model, and High Priestess of Twitter, is expecting her second baby. A boy, with Grammy award-winning husband John Legend. It's supposed to be an exciting time, of course, but there's a little anxiety creeping in there too. Especially when it comes to the couple's 2-year-old daughter Luna. And according to a recent tweet, Teigen shared she's "scared" Luna will hate her baby brother, and her reasoning makes total sense. Sort of.

Although it's hard to imagine anything being too stressful in the hectic and ever-so-busy life of the Cravings author. From an outsider's point of view (sadly, I have yet to crack the code and become a Teigen insider), her life with Legend, daughter Luna, her mom Pepper, various friends and dogs and viral searches for ripe bananas to make banana bread looks pretty damn great.

So how could it be that little Luna would possibly hate her baby brother? Especially since she was the person to let the rest of the world know that her mom was expecting a baby back in November, with a cute Instagram video where she points at her mom's belly and says, "Baby!" Could the bloom be off the rose for little Luna?

Or could Teigen be projecting her own struggles with change on her small child?

It seems Teigen is basing her concern on her own experience with change, in particular the fact that she has a "really hard time welcoming new bravo [sic] cast members." Her fear probably isn't helped by all of the responses she's been getting from *sympathetic* followers.

It's true that lots of older siblings can have a difficult time when a new baby is introduced; I know that my kids turned into silent, petulant demons when their baby brother came home, so much so that I was a little afraid of them... but don't tell them.

But I'm sure little Luna won't have a problem, right?

Although if Luna does decide to develop a Mean Girls attitude towards her sweet little baby brother, Teigen's followers had some advice that might help.

Some Did Provide Helpful Advice

So why does Teigen think Luna might not like her brother? Because she's apparently a whole lot like her mom. Which apparently means she has a bit of a difficult streak. She told Entertainment Tonight during a recent interview, "Baby Luna’s more like me, and I realized I can be difficult, so we’re hoping maybe baby two will be John."

Although wouldn't that mean that a sweet-tempered, docile little boy might not be able to hold his own with a firebrand like Luna? It's something to think about. And Luna has been known to get jealous before, according to her mom. Despite the fact that Luna has apparently been carrying a baby doll around the house in preparation for her brother's impending arrival, Teigen admitted to Entertainment Tonight that the little girl is pretty accustomed to being the center of attention:

It’s hard though, because she’s definitely jealous of John and I. She’s so protective of John and when we kiss, she, like, looks [up] from no matter where she is… You see her little dark eyes somewhere. It’s a little scary.

However Luna might react to the new baby, Teigen will have lots of hands on deck to help her out with any possible meltdowns. Her mom lives with her, and her father lives right down the street. Plus, All Of Me singer Legend appears to be a pretty hands-on father, so hopefully he'll be able to step in and pick up some of the slack if Luna is feeling left out.

Maybe if her mother models more of an accepting behavior towards those new Bravo cast members, it could maybe help Luna out. Who knows, right?