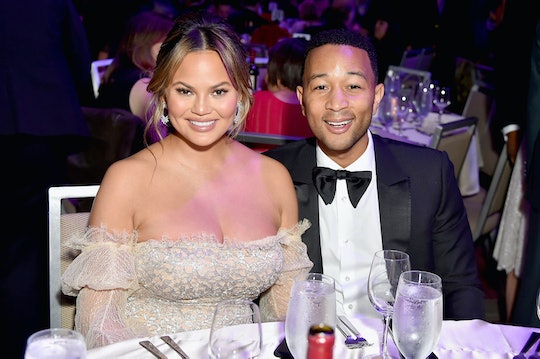 Kids can be too honest to a fault, sometimes. But you can't blame them for not having a filter, they don't know any better. Mom and model, Chrissy Teigen, is kind of known for not having a filter and being honest about all things — from motherhood to pregnancy to the haters getting her down. Because of this, its not surprising that her own offspring, her 1-year-old daughter, Luna is honest, too. On Friday, Chrissy Teigen said Luna called her "yucky" and her honesty shows that it's part of her genetics.

Teigen is currently pregnant with her second child with husband, John Legend. Teigen and Legend are expecting a boy in June, according to Us Weekly, and Teigen has been more than open about her pitfalls in this current pregnancy — including the fact that her young daughter hasn't been too accepting of her pregnant body.

During an interview with E!, according to People, Teigen revealed that Luna didn't have the nicest things to say about her pregnant belly, recently. "We take baths together every night and she says a lot of...she can say some hurtful things in the bathtub sometimes," Teigen said. "Yesterday she pointed at me and she's like, 'Mama yucky.' I'm like 'I know. Mama feels kinda yucky.' They're honest though, these kids."

Teigen shouldn't be offended by Luna's comments (not that she would be). Little kids (especially those around Luna's age) tend to have no filter due to the fact that they're finally starting to verbalize things, according to Parents. And when those verbalizations are made, their comments can be a little offensive — but these toddlers don't necessarily mean what they say. "When something seems different from the norm, that's noteworthy to them," Betsy Brown Braun, author of Just Tell Me What To Say, told Parents. Therefore, because it's so out of the ordinary, they have to let everyone around them know what they're thinking — just like Luna.

Teigen told E! News that while Luna is the perfect combination of her and Legend in the looks department, Luna definitely gets all of her personality from her mama, including that little bit of sass. Teigen told E!, according to People:

Attitude-wise, she is so much like me, which is so funny to see because we shoot each other the same little looks. But she is so sweet and she loves animals — just to see how nurturing and loving she is.

But even though Luna might not understand whats going on with her mom's body (which is so understandable for a 1 year old), Teigen told E! News that she is getting herself prepared to be a big sister by playing with her baby dolls and feeding them bottles. So sweet.

You can't blame Luna for making these comments about her mom, especially since Teigen is full of honesty herself and has not held back when it comes to talking about this second pregnancy. Teigen has been honest about her disappointment with how her body has been filling out with her second pregnancy (she's upset that none of the weight is going to her butt, according to Cosmopolitan) and that she has gotten "bigger, faster" with expecting this second child. In February Teigen tweeted that this second baby was "sucking the life from her." "Why do we create these monsters they want us dead," Teigen (darkly) tweeted.

With Luna being so young, her honest streak is still likely to continue. Luckily, Teigen seems to have a pretty good sense of humor and understanding about it. The best thing about this is, there will be more of these hilarious and brutally honest parenting moments to come from Teigen and Luna herself when Teigen and Legend's baby arrives late this spring.