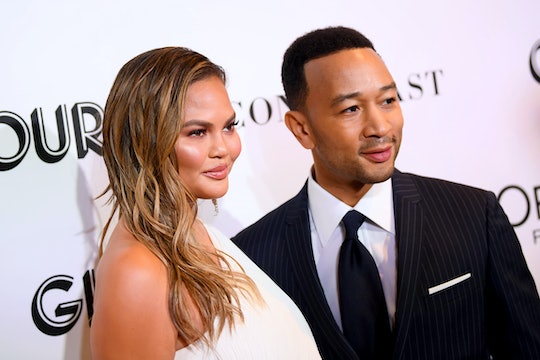 Chrissy Teigen and John Legend are two pretty funny parents. They're always sharing their thoughts and opinions on parenting their two super adorable kids, Luna and Miles. But they're not always having fun when it comes to their kids. In a new interview with People, Chrissy Teigen said she's the "bad guy" when it comes to parenting with her husband and it makes a lot of sense she is quick to take on the role.

On Friday, Teigen told People that when it comes to her two children — 3-year-old daughter, Luna, and 11-month-old son, Miles — she isn't the "good guy" all of the time. Instead, she shares the "bad guy" role with Legend, who is more than happy to split the role with his wife. They do it so their kids see that both parents are in control.

If there's anything that Teigen and Legend are on, it's the same page. When they fight, they fight "very differently" to get to the same place, she told Good Housekeeping in January. "I get passionate and loud, and he's very much a diffuser," she said. "But in the end, we're both apologizers; we don't like to dwell on the same thing."

Since they're so similar in the end, it makes sense that they're willing to share the role.

And Teigen isn't afraid of being the enforcer of the rules, especially since her husband is just a little more lenient with Luna.

"He's definitely easier," Teigen told People. "But I'll be like, 'Oh, you're having string cheese for dinner. OK, well it's 20 minutes until dinner, now you're gonna be full."

"And when you talk to your kids, you're really talking to your husband. You're like, 'Well, you shouldn't have had that 20 minutes before dinner because Mommy is making fish sticks, but I guess you're gonna be a little full now!"

Hey, it happens. This isn't the first time that Teigen has talked about her parenting dynamic with Legend. Legend told Parenting in 2018 that he and Teigen like to divide and conquer when it comes to their kids, taking a "one-on-one approach."

"I'll go out and play with Luna while Chrissy breastfeeds Miles — there is just a little more juggling that goes on," he said.

And when it comes down to it, Legend is a huge softie, especially when it comes to Luna. In September 2017, Legend told People that he doesn't feel like he's going to be too strict of a parent with Luna, especially since he knows she's not a perfect human. "I'm OK with her making mistakes, too, because that's part of growing up," Legend said at the time. "I feel like I'll be patient, and I don't feel like I'll be too strict."

Their difference in parenting styles makes sense, since their kids also have different personalities — Miles is just a little bit more reserved than his older sister. "Luna thinks she can get away with things with us or take things to certain people," she told People — hence why they play good guy bad guy.

Teigen's approach to parenting is pretty refreshing. It's awesome to see that she isn't afraid to discipline her kids and take a tag team role with Legend.