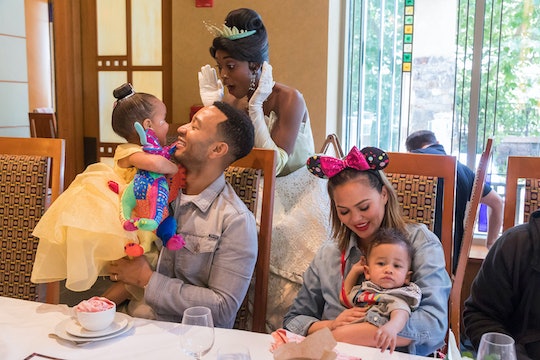 There are definitely perks to having Chrissy Teigen as your mom. First of all your social media presence is already amazing even before you've said your first words. Second, there's the whole amazing wealth thing, that seems pretty great. But mostly? Say what you want about Chrissy Teigen (just kidding, don't) but the woman really knows how to cook. So when Chrissy Teigen shared baby Miles' favorite things and baby back ribs made the cut, I wasn't surprised so much as impressed by the specificity. This kid is only 14 months old and already he has a favorite cut of meat.

The Cravings: Hungry For More cookbook author is wife to singer John Legend and mom to two sweet little kids, 3-year-old daughter Luna and 1-year-old son Miles. While she might be a former model and television host with several jobs under her belt, not to mention a serious social media influencer, she is still a regular mom. The kind of mom who loves doing those monthly updates to keep track of her kid's development along the way. Now that Miles has hit the big milestone of 14 months, Teigen took to Instagram to give us all an update on his favorite things. And spoiler alert, fire trucks made the list.

Not only did fire trucks make the list, apparently they are such a big deal Miles had to feature one in the photo that was pretty much the same size as him. As his mother explained in the caption of the photo:

Little man with all his favorite things! Currently going mad over cars and firetrucks!

Far be it from me to correct Chrissy Teigen but, if I'm reading this list correctly, Miles does not have all of his favorite things with him in this picture. According to the list, he likes climbing on everything and also he loves baby back ribs. Do you see a plate of delicious baby back ribs in this photo? Or a copy of his favorite book Good Night Los Angeles? Me either. It's fine I guess, I just would have really liked to see Miles digging into some ribs to be honest.

Miles' tastes have changed a little since his last chalkboard update at nine months old. As Teigen reported back in February, Miles was not a fan of quinoa back then. Now that he's five months older, has his palate matured? Not so much. His mother reports that he is "still" not a fan of quinoa and also go ahead and add scrambled eggs to the no thank you list.

Miles is certainly growing fast, and his mother is documenting his growth with more than just cute little chalkboard charts. Earlier this week Teigen caught Miles taking his "first real steps," which is a pretty huge deal in any household.

I think we can all agree that these Miles updates are pretty adorable. But can we also all agree that we need to see that little boy mowing down a plate of baby back ribs in the near future?

This is all I want goodbye.