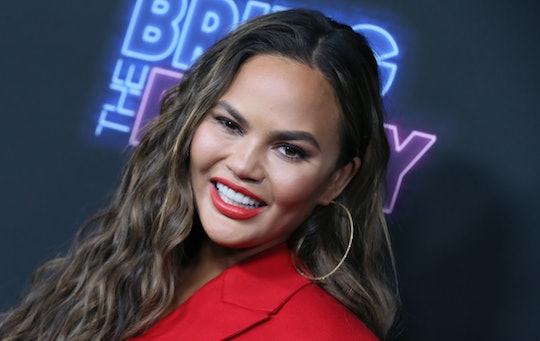 When my son was little he was afraid of noises. Not loud noises, mind you, just random noises that he wasn't expecting. If a person cleared their throat, for example, and he was off in his own world, it was like an explosion went off in the same room. But that's the thing about kids, they are a little unpredictable at times. Super mom Chrissy Teigen touched on this exact sentiment when she shared her son Miles' biggest fears via Twitter, sparking a hilarious conversation among fellow parents in the process. As it turns out, it can be almost near impossible to figure out what goes on in kids' minds sometimes.

As everyone who has internet access knows, the Cravings: Hungry For More cookbook author and her EGOT-winning husband John Legend are parents to two adorable children, 3-year-old daughter Luna Simone and 1-year-old son Miles Theodore. As someone who has written about this little family pretty frequently, I can tell you a certain kind of narrative has been developing for the two kids. Luna is the quirky, outspoken star of social media while little Miles is the sweet, smiling, and laid-back baby. But apparently young Miles has a little secret quirky side he's been hiding, like his fear of bubbles, for instance. And Teigen seems pretty proud of her "sensitive" little guy, writing on Twitter, "My son is terrified of bubbles. I love him so much, my sensitive little dude."

Miles' fear of bubbles could stem from just about anything, which is par for the course for little ones, as evident by thee responses Teigen's tweet generated. Parents reported fears of things like grass, the removal of ceiling fans, and you guessed it, bubbles.

"Mine was terrified of the lawn," one commenter tweeted. "Wouldn’t put her feet on it."

Someone else shared: "Use it. Our youngest was afraid of balloons. When we switched her from crib to bed, I kept her in her room during her naps by tying a helium balloon to her door. Pretty funny hearing her steps, the door squeak open, her little yelp, and her landing back in bed."

A fan joked: "My son was afraid of Cheerios so I feel you."

"My little guy loves ceiling fans and saw a video of how to remove a fan from your ceiling," another commenter penned. "He just about screamed like when Luke Skywalker found out Vader was his dad."

I have a feeling Miles will probably get past his fear of bubbles one day and move on to something else. He is just one, after all, and as Teigen mentioned, he's a sensitive little guy.