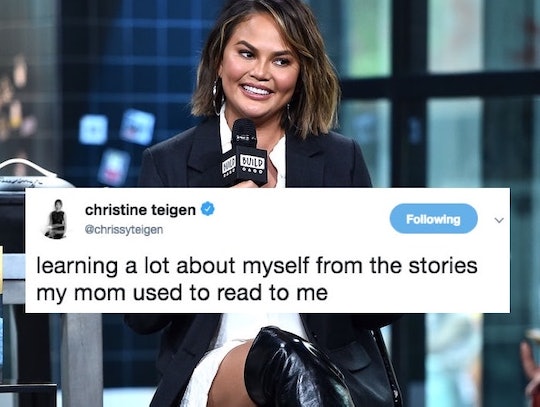 I suspect every parent has a different reason for reading their child a bedtime story. Sometimes it's to soothe them, sometimes to teach. And apparently sometimes you read to your children to scare the heck out of them and keep their life goals in check. Or so it was with Chrissy Teigen's mom Vilailuck Teigen — she seemed to have a different goal entirely. On Tuesday night, Chrissy Teigen shared the children's book her mom read to her and honestly, it's an intoxicating cocktail of tragic, strange, and depressing. The perfect trifecta for any children's story, obviously.

In an effort to pass along information and wisdom from one generation to the next, the Lip Sync Battle host decided to read a story from her own childhood to her 2-year-old daughter Luna. A story once read to her by her own mother, Vilailuck Teigen, who most of Teigen's followers probably know as Pepper Thai. A story probably very unlike most of the presumably uplifting and inspiring pieces of children's literature you read your children. Stories of perseverance, of kindness, of fortitude and gratitude and love and empathy. If you're looking for any of those attributes in this story, get ready to be sorely disappointed, my friend.

So let me break the last few pages of the story down for you as shared by Teigen on Twitter:

And his tiny wings were too weak to fly high... When he flew halfway up the mountain he fell down to the ground and died.

Sidebar: her daughter Luna laughed out loud at that last line, and you just go ahead and make of that what you will.

The last page, which offered up the moral of the story, read: "Doing things beyond your ability never brings good."

So let's talk about the positives here. The book was written in both English and Thai, which would offer a child the opportunity to learn another language. And I suppose maybe there's a lesson in there about being careful, too.

Some found it a little on the strange side.

Others noted that there are some pretty wild children's books being sold all over the world and shared their own stories.

One person was of the opinion that Pepper Thai simply has "no time for nonsense."

I feel I should also defend Chrissy Teigen's mom here. Sure, that book was a bit weird, but the former model and social media influencer herself has said that her mother has been incredibly supportive of her throughout her career, as noted by HuffPost. I mean, Vilailuck lives with Teigen, her husband John Legend and their two children (including Luna's adorably 9-month-old brother Miles), so she is obviously in her corner.

Maybe this book is a little glimpse into that trademark Teigen sense of humor that can sometimes get so hilariously dark. The Cravings: Hungry For More author did caption the tweet: "learning a lot about myself from the stories my mom used to read to me."

And judging from Luna's macabre laugh when the bird in the story died, it looks like that Teigen humor is being passed on through the generations.