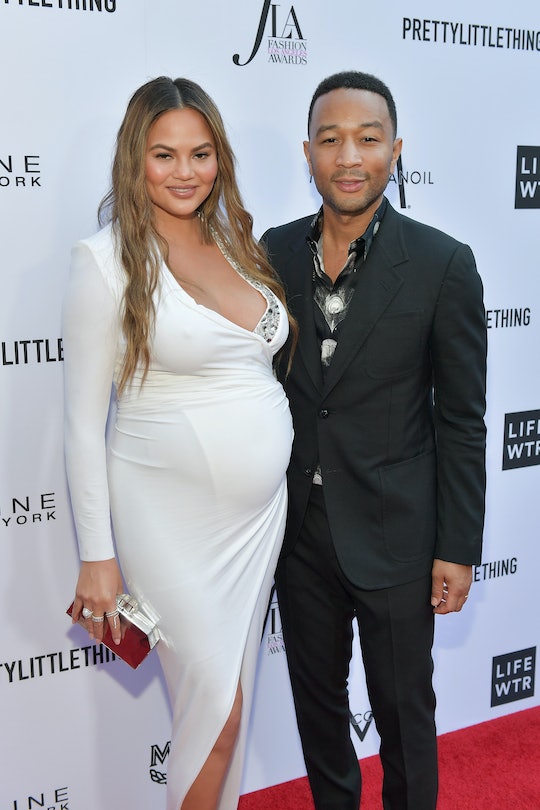 If I could have anything for my birthday in August, it would probably be this; I want Chrissy Teigen to plan my party for me. In that weird way she seems to have, that's simultaneously haphazard, elegent, kitschy, and hyper-organized. It's like a trademark of hers or something; happiness, delicious food, colorful themes, and originality. So you can imagine what Teigen's birthday party for Luna must have looked like, right? Because if Teigen is going to throw an incredible party for anyone, it's definitely going to be her daughter.

Little Luna Legend, famed daughter of model/cookbook author Chrissy Teigen and Grammy award-winning singer John Legend, is turning two on Saturday. And Teigen, who is currently pregnant with the couple's second child, a baby boy, has been in birthday party-prep mode for some time. The Cravings author tweeted back on April 5: "I have officially finished my second cookbook and am wrapping up big fall project planning ohhhh it’s a joy! now I am planning a two year old’s birthday party. I never thought I’d be this mom. I have always been so anti-parties they won’t remember. who am I.” Now it seems the big day has arrived, and how is Teigen planning on celebrating the two years her daughter has been on this planet?

With an incredible cake and Big Bird, obviously.

Teigen shared a short video to her Twitter account on Saturday of the party prep going on, presumably at her home. Fans were especially enamored with the fact that Teigen might be in a jolly mood, planning a Sesame Street-themed party for her daughter, but she still managed to have the news playing in the background.

Of course, what would a birthday party be without a little cake? And when you're the daughter of a cookbook author, you can pretty much guarantee that your cake is going to be off the charts. This cake comes complete with "bird feathers," and Teigen is pretty much losing her mind over them in the video she shared on Twitter. Luna, however, is just hanging on to her dad's ears from her perch on his shoulders and trying to figure out what's going on.

It's been a big week for Luna Legend in general; she turns two on Saturday, and she also said her first "Ellen," which Legend was happy to share with the Ellen, DeGeneres, that is, on Twitter.

The talk show host thought it was a pretty momentous occasion, at any rate. She advised Legend to "put it in her baby book," which had me wondering if baby books are actually still a thing. I feel like Teigen and Legend don't really need a baby book for Luna, because she's essentially the star of both their social media feeds.

Teigen has been criticized for posting about her daughter from the time Luna was born, and she once admitted to People that she "doesn't put too much thought" into what she posts. Which is why many fans love her, of course, but she told the media outlet it does tend to land her in hot water from time to time:

The more you hide, the more people are curious and then it becomes a really frustrating thing. So you don’t want to be too secretive. But if you show a ton then you open yourself up to a world of criticism for showing too much. It’s hard because you want to keep their special moments really special.

Here's hoping that even the strictest of the mommy-shamers out there might give Teigen a bit of a pass for posting about her daughter's second birthday. Because that feels like a pretty special moment most people would want to share, right?