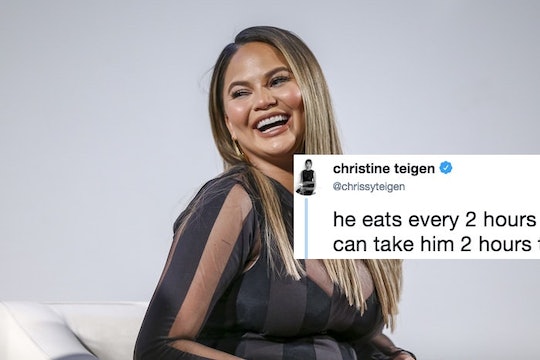 Chrissy Teigen might be a mother of two now, but don't assume she suddenly knows everything there is to know about parenting. I feel like you have to have maybe four or five kids before you get to qualify yourself as an expert, and even then... probably not. Just like every other mom out there, she's sort of figuring things out as she goes. Teigen's confusion about baby Miles' eating schedule will look familiar to any other mom out there who has tried to do baby calculations in their head and failed every damn time.

To be fair here, Teigen only just recently gave birth to little Miles Theodore Stephens. He was born on May 17, and he was several weeks premature at that, according to Us Weekly. So the Cravings cookbook author is clearly still trying to get settled into her new routine with her baby boy. And it's important to remember that Miles' schedule won't look the same as the one his older sister, 2-year-old Luna, might have had when she was a baby. Also there's the whole adding a toddler into the mix while trying to deal with a newborn baby thing.

It's not easy, as evidenced by the overly-complicated way Teigen was trying to figure out her son's eating schedule on Twitter on Wednesday.

So here's the problem the Lip Sync Battle star was trying to figure out: if her son eats every two hours, when should she start timing the two-hour countdown? As Teigen wrote on Twitter:

Say you’re eating lunch. You eat lunch from 12-1. When people ask you what time you are lunch, do you say “12” or “1”? The time you started or the time you finished? Trying to figure out this baby I have.

She went on to point out that it takes Miles two hours to eat, so if he's eating every two hours does this mean that "when he is done, he's really just starting?"

As ever, Teigen's followers on Twitter (more than 10 million at last count, in case you were curious) wanted to help their Queen figure out how to do the feeding math. And the answers were all over the map, I guess because nobody understands the two-hour feeding schedule.

I have a feeling the whole feeding schedule worry is exacerbated by the fact that Miles was born prematurely and his parents want to make sure he gets all the nutrients he needs. Even when Teigen and her husband, "All Of Me" singer John Legend, head out for a date night, the new mom is pumping breast milk in an effort to make sure her baby is well-fed. Legend shared a picture of Teigen pumping on Father's Day, when she was taking him out for dinner, with the caption:

I know it's Father's Day and all but my wife is pretty awesome. She's taking me to dinner but still on mommy duty

Sure, Teigen probably feels like she's feeding her baby boy non-stop. And I bet it's frustrating to still struggle with all of these baby details that moms are supposed to know, even when you've already been a mom for awhile.

Here's the thing; I have four kids and I was just as freaked out by my last baby as I was by my first. Because they all have some weird challenge thing that comes as a total surprise to you, no matter how many kids you've had. So hopefully Chrissy Teigen will get a chance to relax and just go with her gut when it comes to feeding Miles. Because we all trust her, don't we?