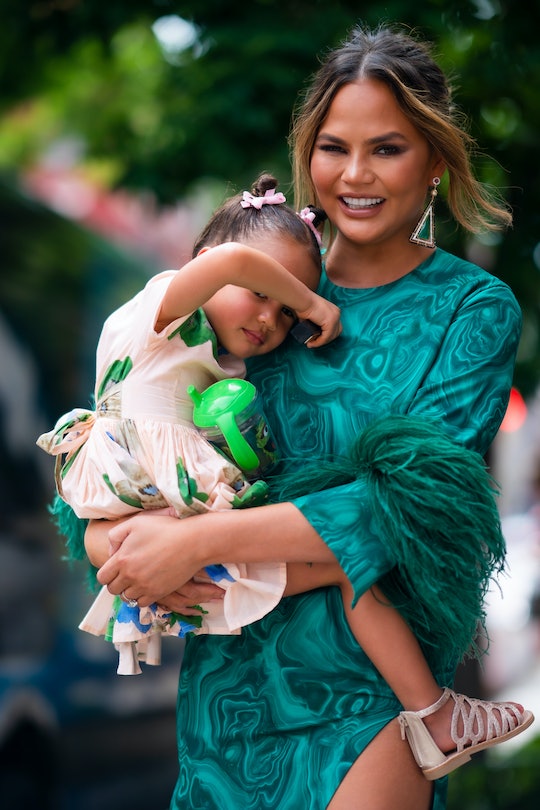 Oh to watch your child turn into you at such a young age. In a recent series of tweets, Chrissy Teigen shared that Luna snuck out of a bed using a clever little trick that harkened her back to her own days as a teenager. And even though Luna is only 4 years old, she might have actually taken this trick to a whole new level her mom wasn't expecting. Should Teigen be worried that her 4-year-old is already dipping her toe into teen waters? Or impressed? I guess we'll all find out together.

Teigen was checking in on her "sleeping" 4-year-old daughter on Monday night when she came upon a bit of a surprise. Instead of a sweet little girl she found several dolls tucked in to Luna's bed, apparently masquerading as her daughter so she could sneak out. Not sneak out for a wild night on the town or anything... Luna was just downstairs hanging out with her grandmother.

But still, as Teigen wrote on Twitter, Luna was seriously ahead of her time. "My daughter is officially pulling this s**t! I didn’t do this til I was 13. She’s downstairs with my mom. Told her to not use the dumpling doll for a head next time," Teigen tweeted.

Teigen went on to point out that Luna took things to another seriously impressive level — the doll who was meant to be impersonating her was even dressed in her pajamas. "I just realized it’s wearing the pajamas she went to bed in. Ok that’s pretty good," she tweeted.

Eventually she got her daughter back into bed, but Luna's sneaky antics had other parents sharing their own stories of the clever ways their kids tried to fool them over the years. One wrote, "My 6 year old tried to sneak extra panda cookies for snack in her shirt and told me 'don’t worry my tummy is just growing, that’s why it’s bigger right now'. KIDS ARE SNEAKY." Another noted, "Never underestimate the brilliance of a toddler.... seriously though....how are they so smart?! SCARY."

As this recent antic proves, Luna is pretty darn clever, something Teigen can probably take a little credit for considering she admitted she was doing the same thing as a teen. Now let's all imagine little Luna and the kinds of tricks she'll pull on her mother as a teen. Batten down those hatches, folks.