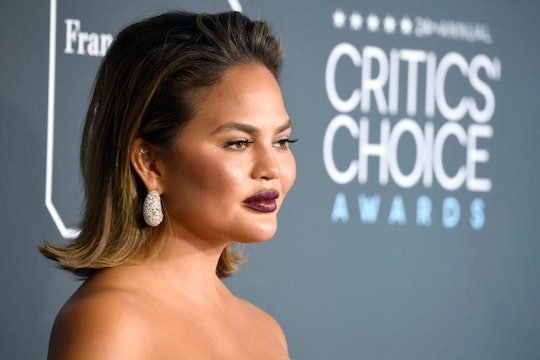 Just when you thought sweet little Miles Legend couldn't get any cuter, his mom posts another picture of him and then you remember... that little guy gets more adorable by the day. First of all, he looks so much like his dad John Legend it's almost comical. Second of all, he clearly has the gentlest little soul ever. And of course, just as Chrissy Teigen predicted, his new helmet somehow makes him that much more appealing. In fact, Chrissy Teigen's latest photo of Miles in his helmet has fans cheering for more reasons than just his cute face.

More Like This
15 Of Chrissy Teigen’s Best Quotes On Motherhood
Bindi Irwin Has Been Sharing The Cutest Photos Of Her Daughter
The Bates Family Keeps On Growing: Get To Know All 19 Kids Here
Lisa Kudrow’s Son Used To Say "Mommy!" When He Saw Jennifer Aniston On TV

Back in December, the Cravings: Hungry For More author first introduced fans to Miles' most useful accessory; a helmet to help him with plagiocephaly, or flat head syndrome. As she told fans on Twitter, "Baby Miles getting fitted for a little helmet today for his adorable slightly misshapen head. So if you see pictures, don't feel bad for him because he's just fixing his flat and honestly he's probably gonna be even cuter with it somehow." She wasn't wrong, that little helmet did make him look cuter... and it's also given Teigen the opportunity to get creative in the sticker department. This week? "Da Bears."

Miles is looking super happy and proud in his helmet covered in bear stickers, and of course Teigen's followers love the picture. Not just because he's cute, either. Many people are just appreciative of the fact that Teigen is normalizing the fact that some babies need to wear helmets to help shape their heads while they're still malleable. As fans wrote on her Instagram post:

Just wanted to tell you that my little girl had to get the helmet for Plagiocephaly. It wasn’t until I saw your first post and read all the positive comments that I felt better about getting the helmet for her. I don’t know why, hard to explain. You just don’t see many public images of babies with helmets so I felt like such a “bad” mom. Thank you for being a big voice for the cranial banding community!💗

My son wore a helmet as well! He is 5 now and has the most perfectly shaped little head! 💙

This isn't the first time Teigen has shared a photo of Miles wearing his helmet, of course.

When she initially shared a picture of Miles' head-shaping helmet back in December, other parents took to Twitter to share pictures of their own babies wearing their own helmet in this lovely display of support.

Sadly, her post was also met with a wall of criticism. Praise too, of course, but the criticism was coming in hot and heavy and insensitive. People accusing Teigen and Legend of going straight to the helmet instead of looking at alternate methods, etc. And no big surprise, Teigen fought back.

There are so many great things about Chrissy Teigen, but one of the greatest is her capacity to use her platform to make people feel better about their lives. In this case, sharing happy photos of her baby wearing his helmet. Because I'm sure there are new parents out there who might worry if they're going into a similar position... and here's hoping they take comfort in Miles' contented face.