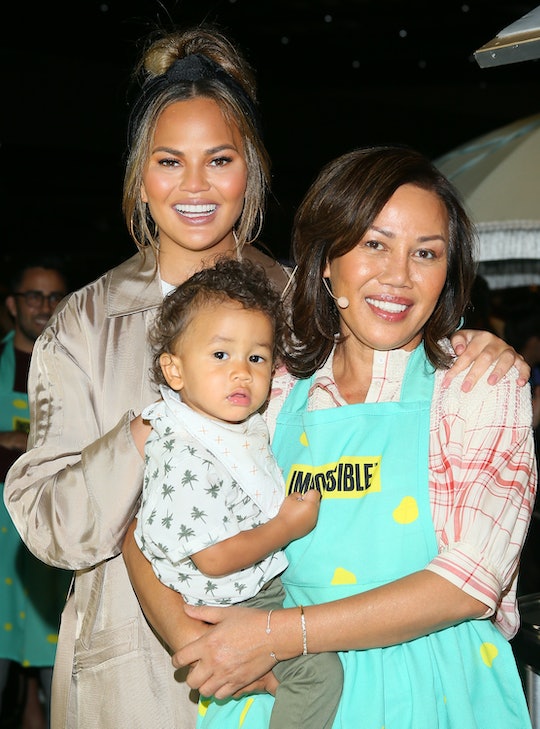 "Two Christmases!": Chrissy Teigen Joked About Her Parents Getting A Divorce

Sometimes things work until they don't and this is perfectly OK. This is true of careers, workout routines, recipes, and oh yes, marriage. People get married and then they evolve, they change, and suddenly it just doesn't feel like a good fit anymore. This is perhaps what might've happened with Chrissy Teigen's parents, who are getting divorced. Months before news broke, though, the mom of two apparently made a joke about her parent splitting up and it showed how she's simply accepting life's changes with humor and class.

Teigen's mom, Vilailuck "Pepper Thai" Teigen, has been a regular fixture on her daughter's social media feed for years. The proud grandmother is often photographed doting on 3-year-old granddaughter Luna and 18-month-old grandson Miles, both of whom call her "Ya" and obviously adore her. Teigen's father Ron is also close to the family and lives just a few minutes away from the home his daughter shares with musician John Legend. As Teigen herself noted in an interview with Us Weekly, their family situation is "unusual, but it works." Recently, though, Ron Teigen filed for divorce from Vilailuck, according to Entertainment Tonight.

People first reported the news that Ron Teigen had filed for divorce on Wednesday, Nov. 6. Ron and Vilailuck share two daughters, Chrissy and her sister Tina. While no one in the Teigen family has publicly spoken out about the divorce since news broke yesterday, it seems it was something that was in the works for quite awhile.

Freelance journalist Karen Valby interviewed Teigen and her mom for the Vanity Fair December cover story awhile ago, and the subject of the divorce came up. Valby reported that Teigen made a bit of a gentle joke about it: "Two Christmases!"

This light joke about one of the benefits of divorced parents, extra Christmas, might seem like Teigen is making light of something. But as Valby went on to explain that her parents' marriage "was long more of a friendship" that was simply coming to an end. Which makes sense considering Vilailuck has been living with Teigen and Legend for quite awhile.

The Cravings: Hungry for More cookbook author explained in an interview with PopSugar Family in February that living with her mom is like living with her "best friend." She said, "We have such a unique relationship; we're so close — she's still my mother, but obviously I'm old enough now where we've become best friends."

Which is perhaps why Teigen was able to step away from her parents' divorce and not make it about her. Not really, at any rate. It seems she understands her mother and father are divorcing but also can see it from the perspective of a grown woman and friend. As someone who respects her parents enough to allow their divorce to be about a shift in their relationship and not hers. Plus, Ron Teigen lives a few blocks away... I have a feeling she'll be seeing him pretty often still. Especially for that second Christmas.