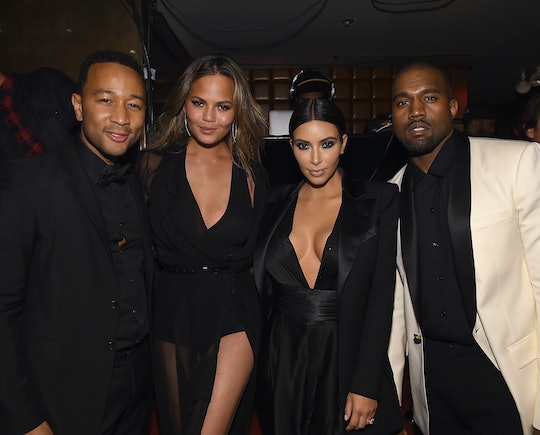 Celebrities are people too. It's true, even though some flippant internet trolls opted to make jokes after news emerged late Sunday night that Kim Kardashian had been robbed in Paris, bound and gagged, and deposited in a bathtub by five gunmen who forced their way into her rented apartment. It would be a traumatic experience for anyone, even a woman who owned the $10 million worth of jewelry the criminals reportedly stole. Luckily, there was at least one fellow famous person ready to provide the cultural commentary and insight jaded tweeters need, and Chrissy Teigen's response to Kim Kardashian's robbery reminds us that, actually, being rich and famous does not preclude anyone from deserving basic human empathy and a right to safety.

Kardashian is back in the United States Monday after her ordeal, which left her "physically unharmed" but "badly shaken," her spokesperson said in a statement to Romper. Since her husband, Kanye West, abruptly ended a performance at a Queens music festival mid-song upon hearing what had happened, the public has learned that the intruders put a gun to her head and forced her into a bathroom. There, alone, with her hands bound with packing tape, she very possibly did not know whether she would live or die.

But perhaps because Kardashian is such a towering figure in our popular culture, her image so pervasive and her brand so relevant that it has dehumanized her to some, the nasty tweets began to populate timelines:

Amid genuine concern for the reality TV star's wellbeing, some people engaged in nasty victim blaming, mocking Kardashian for flaunting her wealth and speculating that the whole thing could be a publicity stunt.

And Teigen, a supermodel, Kim Kardashian's friend, and a known social media sage, quickly called out that unkind commentary with musings on the nature of fame and the relationship the public has with icons of today. "Some shit just isn't funny," she tweeted early Monday, without referring to the incident outright. "I see you trying, but it isn't."

Then, in a thoughtful series of tweets, she explained that she's not advocating for special treatment of celebrities — just a recognition that tough times (and, in Kardashian's case, a truly terrifying, deeply invasive event) can rock their world just like they would anyone else's.

Her tweets communicated that material possessions don't cancel out pain, while acknowledging that it might be hard for many people who look at celebrities and see only shiny, flawless exteriors and lives filled with almost obscene luxury, to understand that.

Teigen concluded her Twitter thread by writing that she misses "empathy, in general, for everyone." That seems like a fair barometer by which to measure our interactions with and reactions to others on social media (and in real life!). You don't have to be a Kardashian fan to realize that violence against women (or anyone) is never OK. The fact that Kardashian is a celebrity, that she is a wife and a mother, doesn't make her any more or less worthy of public concern, though the incident has somehow set her up for scorn when she is a victim. She's a valuable, whole human being simply because she is, not because of or in spite of her relationships to other people or her proximity to fame, just like every other person.