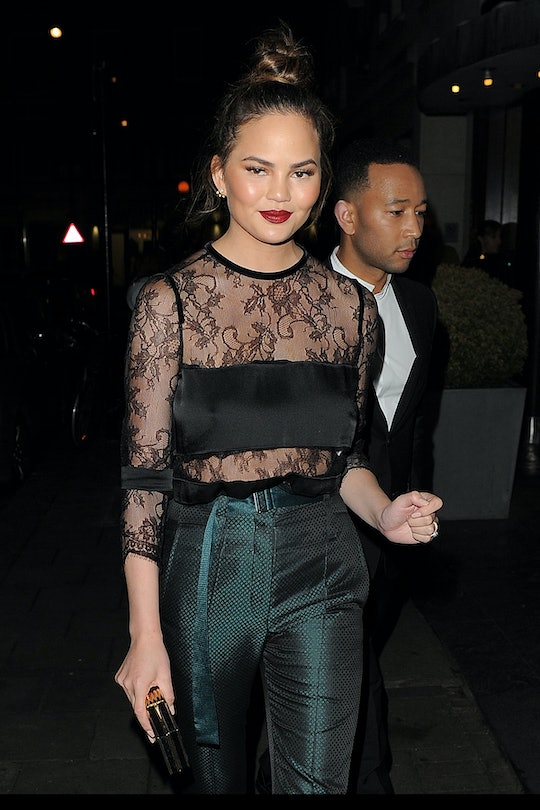 After she made her return to social media following the devastating loss of her third child due to pregnancy complications at 20 weeks, Chrissy Teigen revealed the new tattoo she got in memory of her son, Jack.

Over the weekend, Teigen shared a photo of her new tattoo, which sits on her right wrist and reads "jack" in a lovely, elongated script. Her new tattoo is just above another, in the same script, on her forearm that reads "johnlunamiles." Teigen's husband, John Legend, has a similar tattoo on his inner bicep that reads "chrissylunamiles."

On Sept. 30, Teigen shared intimate images of her and Legend at the hospital on Instagram, documenting their painful goodbye to their third child. "We never decide on our babies’ names until the last possible moment after they’re born, just before we leave the hospital," she wrote on Instagram. "But we, for some reason, had started to call this little guy in my belly Jack. So he will always be Jack to us."

Although she took a brief break from social media and public life, Teigen has been extremely open about the loss of Jack — for some, the images of her in the throes of her grief broke taboos. In October, she wrote powerful essay on Medium, which detailed the specifics of the loss and its aftermath. In it, Teigen shared that she'd been diagnosed with partial placenta abruption and was experiencing heavy bleeding. "My bleeding was getting heavier and heavier. The fluid around Jack had become very low — he was barely able to float around. At some points, I swore it was so low I could lay on my back and feel his arms and legs from outside my belly," she wrote in part.

"People say an experience like this creates a hole in your heart," she added. "A hole was certainly made, but it was filled with the love of something I loved so much. It doesn’t feel empty, this space. It feels full."

This idea of keeping loss visible — something so many women who have experienced such loss long for — has made Teigen opening up so important. Despite being common, affecting between 10% and 15% of recognized pregnancies, miscarriage and stillbirth are nevertheless often spoken of in hushed tones, adding to the stigma and isolation many feel, as well as the fear that their child will be forgotten.

But Teigen's willingness to share her pain and vulnerability has given others space to grieve and, perhaps, made it easier for others to open up as well. Her new tattoo, right on her wrist, is another sign that she has no interest in hiding her memories of her child, even if they're painful.

"Jack will always be loved," she wrote in her essay, "explained to our kids as existing in the wind and trees and the butterflies they see."