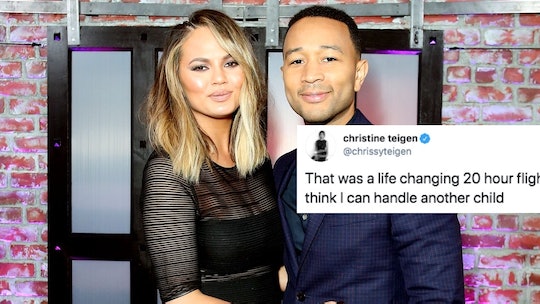 The first time I flew with my children I already had four of them, so it was too late to make any major decisions about having lots of kids. They were already there, I was already living it, so there was no point in looking back and wondering if perhaps four kids was too much for a single mom. Chrissy Teigen is apparently a little better at thinking ahead than some of us. After she experienced a long "life changing" flight with her family, Chrissy Teigen's thoughts on having more kids may have changed. But that could just be the 20-hour flight talking...

At the moment the Cravings: Hungry For More cookbook author is in the sweet spot of parenting; she has the same amount of children as hands, which is two. Plus her 3-year-old daughter Luna and 1-year-old son Miles are outnumbered by adults in the house since she and husband John Legend also live with her mom Vilailuck Teigen, so you would think she'd be pretty satisfied with her position as a parent.

But just because she's pretty happy with the two kids she has doesn't mean she hasn't given some thought to adding a third at some point... that is, she was thinking about it. Before she and her family boarded a flight for the 20-hour trip to visit Thailand recently.

Teigen is visiting some family in Thailand with her kids, which will presumably be a great situation now that she's arrived. Extra people to love your kids and help you out and such, who doesn't love that? But she had to get there first and therein lies the rub.

The Bring The Funny host tweeted on Tuesday that she no longer things she "can handle another child" after the 20-hour flight, and if her earlier tweets are to be believed it does sound as though it was especially stressful. For instance, it sounds as though Miles was not allowed to sit in a car seat and rather was "rolling in pillows" throughout the flight, as Teigen wrote on Twitter.

While this isn't the first time Teigen has flown such a long with with her two kids, this is the first time her flight was difficult enough to have her questioning whether or not she wants to expand her family. Something she told People last September she and her husband John were definitely open to. Teigen explained that she was really happy with just two for now but, "I think when I’m 70, I’ll look back and say, ‘Oh, I wish I had more.’ I can’t see myself regretting having a ton of kids."

That was before this flight though so you have to wonder how harrowing it really must have been. Certainly Teigen's fans took to social media to sympathize with her and share their own woeful tales of flying with children.

I think any decisions made after a 20-hour flight should be taken with a severe grain of salt. Nobody plan on closing the door on Chrissy Teigen having more kids yet. Give her a few days and then check in after she's had some rest. Or she might be done for real, I guess we will have to wait and see.