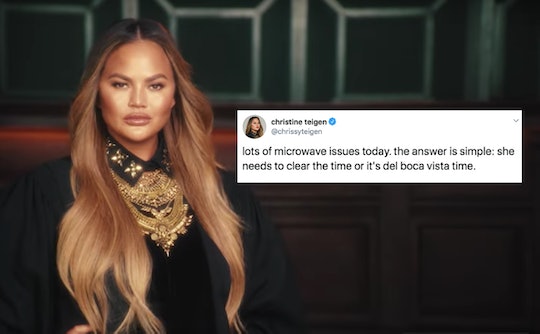 Are you and your partner having petty skirmishes over household issues now that you're both working from home? You're not alone and what's more, there's help on the way in the form of the Mayor of Twitter. That's right, Chrissy Teigen's TV show Chrissy's Court will settle the most petty of petty disputes, and she's already taking cases from her followers on Twitter. Heck, even if you're not having any problems that require legal action, it really makes for some good distraction right now.

The Cravings cookbook author and her mom, Vilailuck "Pepper Thai" Teigen, are the stars of a new series called Chrissy's Court coming out on Quibi, the short-form mobile video platform, on April 6. The premise is much like the tried-and-true formula of old school shows like The People's Court and Judge Judy, but with that little extra Chrissy Teigen element it was missing.

As Teigen explained in the first preview released on Wednesday, she will act as the judge and jury for people bringing her important cases like "your roommate stealing your clothes and trying to sell them back to you," or "your ex borrowing your phone and returning it with a cracked screen." Her mom will act as bailiff once the show begins.

Until the show begins next month, however, Teigen has decided to take matters into her own hands on Twitter. And considering the fact that most people are either working from home or not able to work at all because of social distancing measures needed to stop the spread of the coronavirus, there appear to be a whole lot of petty disputes to go around.

Like this newly married man who reached out to Teigen with an urgent butter question: "Is it ok to leave butter out in a little dish because you want soft, room temp butter on deck? Or do you need to put butter in the fridge always. Help us."

Teigen had an answer for him: "Butter out in a covered BUTTER dish is fine. Butter out with any kind of bowl/plate situation with foil or Saran Wrap is NOT FINE."

Or how about this woman who argued with her boyfriend about the placement of their trash can?

"Judge @chrissyteigen," she tweeted. "Please settle a dispute regarding the placement of our trash. I think the left is ideal-it fits well and doesn’t block a cabinet. My boyfriend says right because it’s closer to the sink and frees up the walkway to the kitchen area. Who’s right?"

Chrissy Teigen decided they were both wrong. "both absolutely insane options. I need it to go inside a cabinet, court will pay for shelf removal," she ruled.

There seem to be a lot of problems with microwave etiquette as people are quarantined together, maybe because we're all eating constantly. Happily, Teigen had some advice for one person whose mother-in-law who leaves the microwave on with a few seconds left all the time; she needs to get it together or it's off to "Del Boca Vista." A Seinfeld-ism for a retirement community.

Chrissy Teigen might not have the answers to all of the uncertainty hanging over our lives right now, but if you have any food-related squabbles she's there for her fans. Right when we need her most.