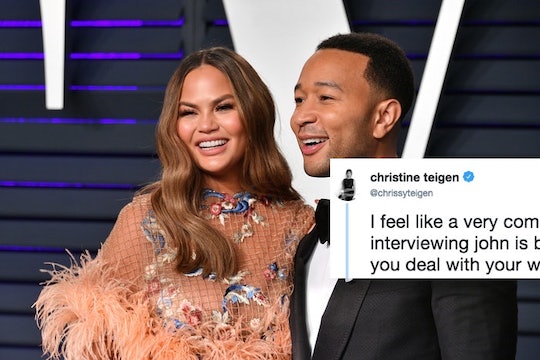 One of my favorite things about John Legend other than his awesome talent is how incredibly open he is about his adoration for his wife and kids. Because he seems to know that he is a very lucky man in life; two adorable kids, an amazing career, and a wife who is a powerful force unto herself. So why, oh why, would anyone ever presume to think that he would struggle to come to terms with his wife? It's a mystery, but apparently it happens. And Chrissy Teigen's tweets about why she's over questions about how her husband "deals" with her needs everyone's attention... because really? That's a thing you ask a person?

Teigen and Legend have been together for more than 12 years, according to TIME, married for five years and have two sweet kids together, 2-year-old daughter Luna and 9-month-old son Miles. Legend has rather famously written songs about his wife, one of which was called "All Of Me" and was essentially about how he loves all of her.

And yet it seems reporters have decided that one of their favorite questions for John Legend is how he "deals" with Chrissy Teigen. A woman who is a cookbook author twice over, hosts Lip Sync Battle, and basically runs Twitter at this point with the lightest touch imaginable.

"I feel like a very common question when interviewing john is basically 'how do you deal with your wife' and ... I don’t love it," she wrote.

There have definitely been insults levied against Teigen in the past; like at the 2018 Emmys when a reporter from Texas named Heidi Alagha tweeted that Teigen was "beautiful but does she have to be included in everything just because she’s married to John Legend?," as per Essence.

At the time Legend made it very clear he wouldn't be putting up with any insults, tweeting: "A reporter who doesn't know how to use Google Sad." But apparently the questions have persisted, as Teigen tweeted on Tuesday.

"It happens a lot. 'does she ask you if certain things are okay to say?' ...it’s just very weird to me," she said.

I'm confused as to why she would need his clearance before speaking, but OK sure. She continued to say that Legend has a patent response he uses, but they are both still pretty fed up with the question itself.

She tweeted, "he usually does the standard 'no...she knows what she’s doing...' but it’s not even that. It’s just that I am a different human than him? It is theeeee most common question with him. Please stop."

Teigen makes an excellent point here: Why are people asking him how he manages to "deal" with her because she speaks her mind and is very much her own person? Shouldn't these be considered admirable traits? As she points out in her next tweet, people don't ask her how she deals with his moods.

This is bland old vanilla sexism at play here. The presumption that a strong woman needs to be "dealt" with by her husband is offensive and, frankly, a little dangerous. Because how exactly is he expected to deal with her? To dim her light, to make her more palatable or manageable?

John Legend doesn't appear to me to be in the business of trying to "deal" with his wife or offer his permission for her existence. And I'm glad Chrissy Teigen has made it clear that those questions are really not welcome in the future.

I truly can't imagine why anyone thought they were acceptable in the first place.