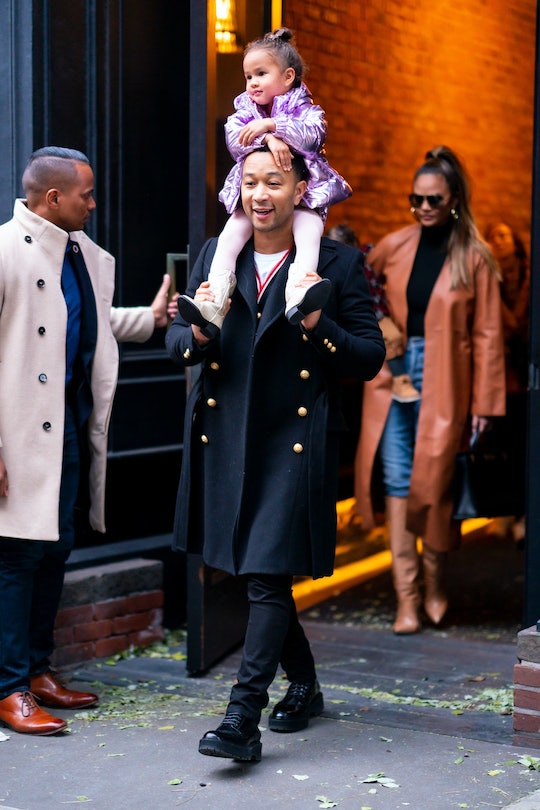 Chrissy Teigen, Thank You For Capturing This Video Of Luna Calling Her Dad "John"

John Legend is arguably one of the most respected musicians of our time. He's managed to win every single award available to his profession, he's a judge on The Voice, people line up to see him in concert... But when he's at home? Well, that seems to be a different story, as evidenced by a new video of his daughter Luna hilariously calling him "John." No, not dad, daddy, or papa — she called her father by his first name.

Chrissy Teigen and her EGOT-winning husband recently adopted a new dog, a sweet little rescue standard poodle puppy named Petey, who has clearly captivated the entire family, especially the couple's 3-year-old daughter Luna. The precocious little girl has been featured on her mom's social media clearly falling in love with the family's new dog. Cuddling with little Petey in a big chair, carrying him around, and most recently she was caught on video delivering him into the arms of her waiting father, who she referred to as "John" — much to her mother's amusement and surprise and her father's shock and apparent irritation.

In the video Teigen shared on Instagram, Luna is carrying their very fluffy and irresistible puppy in her arms over to her father and asks "John, would you like to hold her?" Teigen immediately bursts out laughing while Legend says, "John? I'm not John. I'm your dad."

I mean, he is actually John, but I think he means he would prefer it if Luna would call him "dad" or some other such paternal title. He doesn't appear to love the idea of his little girl calling him "John." Unfortunately for him, everyone else seems to think it's kind of hilarious. Teigen's social media followers shared their enjoyment of Legend's reaction with comments like "John's face!" and "Maybe he prefers Mr. Legend?"

To be fair to Luna, it's pretty common for little kids to call their parent by their first names, especially since they hear other adults using that name. Also let's face it, that puppy is seriously adorable and it makes sense that the little girl would be a bit distracted by the cuteness. Even her 1-year-old Miles is in love with the dog.

Teigen shared a video of him kissing the puppy and I've never been more jealous of a toddler in my life. No wonder the household, which already has a few other pets, is a bit topsy-turvy right now.

Seeing Legend's reaction to his daughter calling him "John," I'm certain it won't become a thing. I don't think he could stand it.