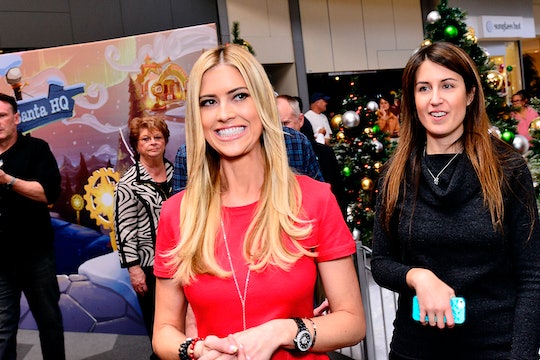 HGTV star Christina El Moussa has come a long way in the past few years. After struggling through a presumably painful and very public divorce from her husband and Flip Or Flop co-host Tarek El Moussa, the mom of two has come out the other side to a happier place. Much, much happier from the looks of things. In fact, on Friday Christina El Moussa married Ant Anstead in a surprise ceremony with her own children and Anstead's fully included. Because life goes on, and sometimes happiness is apparently just around the pike.

El Moussa has been dating the British host of Discovery's Wheelers and Dealers since October 2017. As the story goes, Anstead called her up out of the blue then FaceTimed her while visiting Las Vegas. El Moussa apparently had her reservations at first, as she told People in October; "(I was thinking who FaceTimes). Anyways I answered and we spoke for 2.5 hours… two days later we met for the first time and we’ve been inseparable ever since #FATE.” They both have children from previous relationships; El Moussa shares 8-year-old daughter Taylor and 3-year-old son Brayden with Tarek, while Anstead is father to 15-year-old daughter Amelie and 12-year-old son Archie.

While combining two families isn't always easy, it seems as though it's working quite well for Anstead and El Moussa. The pair took their blended family on a Hawaiian vacation in August, where everyone looked like they were having a blast on social media.

And, of course, when it came time for the two to get married at the home they share in Newport Beach, California, it was vitally important to them that their kids were included. As Anstead told People:

We wanted to make it about the kids. It’s the six of us. We’re a blended family so it was really important for them to be a part of it.

Their blended family was joined by 70 close friends and family, who had all arrived at the home under a clever ruse. El Moussa and Anstead wanted to keep their wedding details private, so they invited everyone to their house to supposedly watch the Newport Beach Christmas Boat Parade. Instead guests were treated to a surprise "Winter Wonderland" wedding, as per Entertainment Tonight. El Moussa told People:

We wanted it to be rustic romance.

Of course, one of the difficulties of a surprise wedding is maintaining secrecy, and El Moussa admitted to People that they were nervous right up until the last moment.

Every day we were checking the internet to see if anyone found out. Then the day we went to get our marriage license, the guy working was like hyperventilating, excited. We had to tell him this is a huge secret. No one knows.

El Moussa (who plans to change her last name to Anstead) enjoyed a beautiful wedding day with her kids and stepchildren right there to support her. After struggling through a few difficult years, it must have felt like all was right with her world at last.