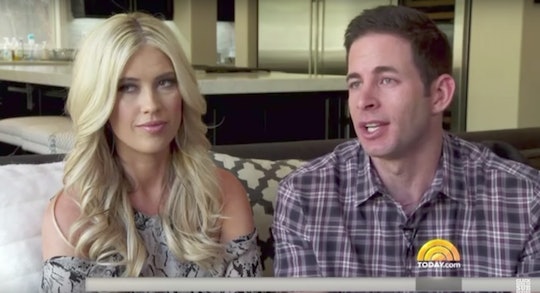 Behind the made-for-TV façade of their popular HGTV show, the hosts of Flip or Flop, once a married couple, have shared an incredibly tumultuous off-screen relationship before their eventual split. And now, just shy of a year after they publicly announced that they were no longer together, Christina and Tarek El Moussa shared how they've handled their divorce in two separate Instagram posts. Of course, fans will never know the full story of what happened between these two HGTV stars, who have two young kids together, but their same-day online updates certainly show that they've made some progress. It's information fans will certainly want to have, as Flip or Flop is still going strong despite the trouble between its stars.

The El Moussas first announced that their seven-year marriage had come to an end in December 2016, although they had reportedly been separated for eight months before that, according to People. Christina has claimed that a breakdown in communication exacerbated by her ex's bout with thyroid cancer, a miscarriage, and infertility issues affected their marriage in a negative way.

Whatever the specific reasons for their divorce, a scary situation at their Los Angeles home during which Tarek allegedly left with a gun illustrates just how bad things may have gotten between them. Eleven police officers and a helicopter responded to that May incident, People reported, and Tarek surrendered the gun within minutes.

A witness told the magazine that this left Christina "crying and shaking," but the then-couple subsequently released a joint statement brushing it off as a misunderstanding:

We had an unfortunate misunderstanding about six months ago and the police were called to our house in an abundance of caution. There was no violence and no charges were filed.

So, it goes without saying that the former couple has had their share of hardship. Which makes it all the more striking that they came out with Instagram statements at practically the same time to give fans some insight into how they've been coping. For his part, Tarek posted a picture of a quote from a speech that Harry Potter author J.K. Rowling gave at Harvard's 2008 commencement ceremony, E! News reported. "Rock bottom became the solid foundation on which I rebuilt my life," it reads. Obviously, it hit home for Tarek, whose lengthy accompanying caption reads in part:

We've all faced obstacles and for many they were so horrific they hit the lowest point of their life with no future in sight....when you are at the bottom you feel nothing but pain, misery and despair. Even though you can't see the light at the bottom it still exists and as time goes on that light starts to shine. Once that light starts to shine take the opportunity to reevaluate who you are and what you want to be. Take it as an opportunity to bounce back and be stronger than ever.

Christina's take on the situation was similarly positive. She chose a quote from David Crosby's 2014 book Your Pain is Changing You: Discover the Power of a Godly Response to share with her followers. "Pain will change you more profoundly than success or good fortune," it reads in part. "Suffering shapes your perception of life, your values and priorities, and your goals and dreams. Your pain is changing you."

And then, of course, came Christina's own take on that in the caption. It was much briefer than her ex-husband's: "Couldn't agree more. #keepthefaith."

It's good to know that these two are doing well and are looking toward a more hopeful future, as they have 7-year-old Taylor and 2-year-old Brayden to coparent. Oh yeah, and a popular home improvement show to host together.