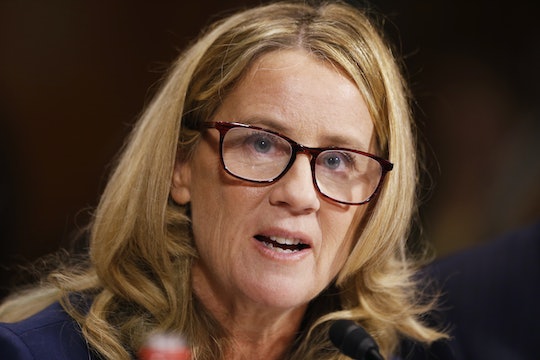 Stanford University professor Dr. Christine Blasey Ford has been out of the spotlight since her remarkably-composed testimony in September prior to the confirmation of Brett Kavanaugh as the United States Supreme Court's newest justice. But this week, on Dec. 11, Ford emerged in support of another sexual assault survivor in a rare and powerful public statement.

Ford returned to public view in order to honor attorney and gymnast Rachael Denhollander by starring in a video introducing her as Sports Illustrated's Inspiration of the Year, according to Glamour. Denhollander was the first woman to accuse former USA Gymnastics team doctor Larry Nassar of misconduct, and it was her legal action that inspired over 200 gymnasts to go public with their own experiences of assault at the hands of Nassar, according to Yahoo News.

In January of this year, Nassar was sentenced to up to 175 years in prison after Michigan Judge Rosemarie Aquilina heard the stories of victim upon victim, CNN reported at the time.

In the new video, Ford praises Denhollander's decision to take the first steps in reversing the trend of silencing victims and pursuing justice.

"I am honored to speak to you from afar about a woman I admire so much, a woman who suffered abuse as a vulnerable teenage athlete," the professor says in the video, which was shared on Sports Illustrated's Twitter account on Tuesday, Dec. 11.

She continued, "Her courage inspired other survivors to end their silence and we all know the result."

Ford, a professor of clinical psychology at Palo Alto University and its partner, Stanford, is a respected academic whose work has been widely published, according to The Washington Post.

Unfortunately, it became clear to those of us who viewed the hearings this fall that even someone as dignified as Dr. Ford was automatically assumed to be untrustworthy after she came forward with allegations that Kavanaugh assaulted her at a high school party decades ago, culminating in her being asked to publicly disclose her story, as The Washington Post reported. Kavanaugh has staunchly denied the allegations, according to NBC News.

Ford became a symbol for assault victims nationwide, as Glamour noted, when she gave testimony before the Senate Judiciary Committee in a hearing that galvanized the United States.

Ultimately, Kavanaugh was confirmed to the Supreme Court on Oct. 6. according to The New York Times. And since then, Ford had remained out of the public eye, as TIME noted.

This could be due to the fact that, according to Mother Jones, Ford and her family reportedly received multiple death threats since her testimony, and she has not been able to resume a normal work schedule.

But she did take the opportunity to weigh in the fortitude of individuals such as Denhollander, who was honored at Sport Illustrated's "Sportsperson of the Year" award ceremony in Beverly Hills, which will be telecast on NBCSN Dec. 13, according to Sports Illustrated.

"...You galvanized future generations to come forward, even when the odds are seemingly stacked against them," Ford added in the video, adding:

The lasting lesson is that we all have the power to create change and we cannot ourselves to be defined by the acts of others.

Ford's statement is very apropos, considering that many have tried to dismiss and discredit the validity of her own words, as HuffPost reported.

While it seems unlikely that more about Kavanaugh's past will emerge now he is a full-fledged member of the Supreme Court, I still feel sad and puzzled that society continues to dismiss women. But Ford's words bring hope that we, especially as parents, "have the power to create change."