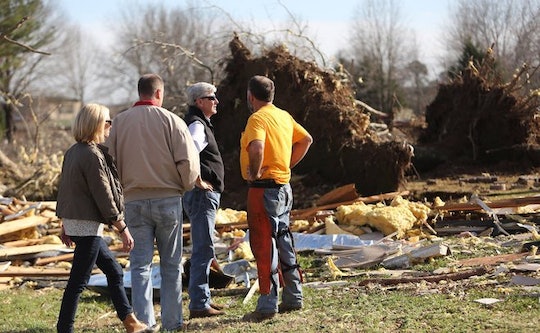 Just as residents are still cleaning up from 24 tornadoes that spawned across seven states on Wednesday, residents in Birmingham, Alabama are dealing with the aftermath of a Christmas Day tornado that left three injured and dozens homeless. The National Weather Service reports that approximately 50 homes were damaged with 15 homes left uninhabitable. Among the damaged buildings was the Mount Olive Gospel Church; no one was inside the building when the church collapsed during the storm.

The National Weather Service has given the damaging tornado a preliminary EF-2 rating on the Enhanced Fujita scale, with its strongest winds reaching up to 130 mph. The Jefferson County tornado tore through homes and businesses early Friday evening just before 5 p.m. local time. The EF-2 tornado actually spawned after a much weaker EF-0 tornado touched down in the nearby city of Coaling at 3:31 p.m. local time.

The weather woes aren't over yet as forecasters have issued a number of flash flood warnings across the state in the wake of Friday's storms. This unwelcome news comes after a holiday week marked by several deadly storms across the southeastern U.S.. On Wednesday, up to two dozen tornadoes were reported across seven states; the initial death toll from Wednesday's storms has now risen to 15 dead.