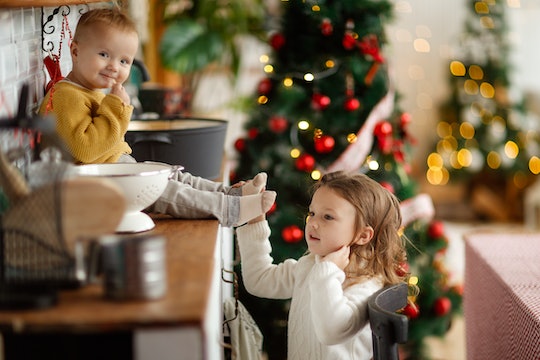 This second baby has no idea he's getting a box full of Little People from two years ago. Photo: Shutterstock

Seriously, What Do You Buy A Second Baby For Christmas?

Like a Little Drummer Boy who won't pipe down so baby Jesus can sleep, the ba-rum-bum-bum-bum of Christmas responsibilities can really do in my nerves. But when it comes to shopping for my daughters, I am overwhelmed with glee. This Christmas, I have a 5-year-old begging for a Barbie Dreamhouse, and a 1-year-old that... has no idea what she wants. Seriously, what do you buy a second baby for Christmas?

My husband and I sat up late one night around Thanksgiving and tried to remember what we bought our oldest when she was the same age. She was into Sesame Street, and we both remembered a box full of tiny Elmo and Big Bird figurines, as well as a box full of plush characters. But the 5-year-old doesn't let the baby get a turn with the remote and, despite our best efforts to make her look at a screen and buy us an ounce of peace, she's just not into any kind of character.

"Oh! We got her that little car," my husband said. Yes, I remember staying up Christmas Eve to put together that Little Tikes Cozy Coupe... which she was still kind of too small for, so she never could figure out how to drag her feet to make it go, and I think it's covered in mildew in the backyard somewhere now. (The manufacturers says 18 months is the minimum age for this toy, by the way. Heed my warning.)

So we kept going — everything we could think of that we bought our oldest was either a toy she didn't give two hoots about a week later, or was a toy we just knew the baby wouldn't be interested in. But the gifts that we remembered being a hit?

Well. We still have them. Turns out, the 850 different Little People sets and accessories we bought four years ago are still a major hit.

Which means you can buy a second baby essentials, like clothing or diapers or even formula depending on how young they are. Do they need a new car seat? A stroller? Now's your chance to play Santa while also giving your baby something other than another pacifier. (TBH, you can never have enough of those.)

But for slightly older second babies, our Christmas list has looked a lot like replicating some of her favorite toys that our oldest won't let her play with. Like a 1-year-old is a little too small to play with the 5-year-old's kitchen, but hey! The Fisher-Price Laugh & Learning Kitchen is basically the same thing in baby size. Second baby inexplicably loves the vacuum? Well even if your oldest has a pretend Dyson, you could always use two Cinderellas to sweep up their own spilled Goldfish.

And if you really enjoy stepping on painful items and also forever picking up tiny bits of plastic to put inside of a Target basket, I recommend a bag of Mega Bloks First Builder blocks. If your oldest is still firmly attached to their favorite baby blanket, a sweet muslin quilt for your newest might be on Santa's list. (Also, like pacifiers, you can never have too many blankets.) And for the baby who fell in love with big sibling's outgrown toy that the sibling now has to have back because they "Looooove it, Mommy, it's my faaaaavorite!!!" there's always a classic PlaySkool Glow Worm.

What do you buy a second baby for Christmas? Literally anything. They have no idea what's going on, and your oldest is too busy ripping into their presents to notice the baby has like three pairs of Carter's leggings and a box of diapers. You're a seasoned veteran at this parenting thing now. You know what gets played with. You know what's worth the money. And if that means you just keep all your empty Amazon boxes for your baby to crawl in and out of, then by all means, Santa. Sleigh it.

And also maybe be prepared for the big sibling to suddenly decide all of baby's new toys are peak MINE.

More Like This
30 Adorable Baby Halloween Costumes, From Animals To Avocados
The Best Halloween Family Pajamas To Match Your Boos
25 Mother And Daughter Halloween Costume Ideas That Are Cute And Spooky
The Difference Between The PICU & The NICU