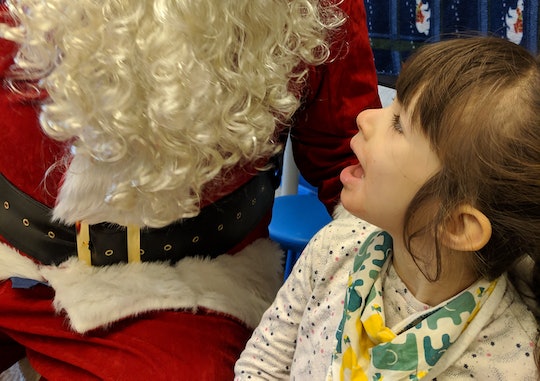 Being Able To Meet Santa Isn't About Needing A Wheelchair Ramp

Recently, my longtime friend, Amanda reached out to me to share a story from the Boston Globe that focused on how the holidays are particularly stressful for families facing medical challenges. Amanda asked me whether the holidays were different for me than for her with healthy children — and how. In seven holiday seasons of having a child with medical challenges, Amanda is, to the best of my memory, the first person who asked me this. What happened — as it so often does when someone compassionately asks a question of someone and then actually takes the time to listen to their response — was a bit eye-opening for both of us.

First allow me to explain my history with Christmas: I’m convinced that for a few years when I was little, I had the most amazing Christmases a kid could possibly have. They weren’t filled with expensive toys overflowing the bottom of the Christmas tree. However, they were filled with magic, fun, and coziness. My mom loves Christmas, and her excitement about baking and gift-giving was enough to pull even my father — ever skeptical about all things relating to consumerism, religion, and pop culture — into the fun of it. My Christmas memories include coming down the stairs with my half-sister to find Santa having left an overturned chair, sooty boot prints to and from the fireplace, and cookie crumbs everywhere. Or watching my mother’s Christmas sticky buns browning, eager to eat them and even more eager for what came after: the opening of gifts. Or opening a the best gift ever: a little tool box filled by Santa’s elves with small tools and wood scraps from my father’s work as a carpenter.

Given my childhood experiences, I hadn’t imagined that as the mother of an almost 8-year-old, I'd be planning this Christmas without going to go see Santa in the mall, giving her fewer gifts than ever, and that this year the gifts under our tree won't be wrapped.

Now, as an adult I’ve leaned toward the (extremely) anxious around the holidays, a feeling that developed from the later years, after my parents’ divorce and the implementation of decidedly un-magical Christmas schedules. However, my early Christmases were such a gift, that I knew that once I had a child of my own, I would want to give that child every bit of Christmas magic I could muster. When I was pregnant, I imagined baking with my daughter. I planned traditions for future Christmases. I assumed that this Christmas — the one right before she turns 8, would be some of the best of it.

I always just kind of thought 'Oh how lovely that everyone can attend the festival of trees,' thinking about how they have wheelchair ramps and wide doorways.

However, this year I am really struggling with how to make my daughter Esmé’s Christmas magical, because so much of the bundle of how we celebrate Christmas — the food, the unwrapping, the multiple people-filled visits — just isn’t exciting for her. Esmé has multiple genetic mutations that lead to a number of medical and developmental challenges, and these challenges have a significant effect on the way I feel about the kind of holiday experience I can provide for her. Most people understand that there are health risks inherent in the germ-y interactions of this time of year, and that such things can quickly develop into something that wipes out weeks of her health and threatens hospital stays for Esmé. She has only just recovered from the cold she caught in the week before Thanksgiving, after all.

But the part that is much more pervasive, and much harder for others to grasp, it the challenge of making Christmas actually fun for her — not just meeting some idea of what Christmas should be like. In other words, just because she can be physically present for something that is typically fun for other children, does not mean that it is fun for her to do so.

As I explained to my friend Amanda, since Esmé doesn’t eat by mouth, the treats so commonly relied upon for Christmas activities and fun are not meaningful for her. And while Esmé will sometimes patiently sit in one of her supported seats and watch me as I bake, this activity resembles her occupational therapy sessions — her work, rather than the anticipatory joy I felt making cookies and sneaking bits of raw dough when my mom turned her back. I told Amanda that furthermore, during previous Christmases, Esmé has shown outright disinterest in opening gifts — save for the pile that the REAL Abby Cadabby sent her after they met on the Sesame Street set. Typically, after we help her open one toy that is in her wheelhouse, Esmé wants to play with it, and only it. And, while she is non-verbal, she expresses clear anxiety around being pressed to open other presents. Which is, decidedly, unjoyful.

The look on her face in these moments tells me she feels as though she is falling short somehow... Of course, it isn’t Esmé who is falling short. It is the adults in her life that haven’t yet cracked the code for how to make the kind of magic that works for her during the holidays.

This anxiety increases markedly when other children are around. As her mother, I can see her discomfort as she tries to make sense of the excitement of other children or as she watches them play with her new toys more effectively than she can. The look on her face in these moments tells me she feels as though she is falling short somehow — and the idea of her feeling that ever, but especially much during Christmas, makes me want to scream.

Of course, it isn’t Esmé who is falling short. It is the adults in her life that haven’t yet cracked the code for how to make the kind of magic that works for her during the holidays.

As I explained, my friend Amanda was clearly surprised by having never thought about the details of the experience from Esmé’s perspective. “When I have seen special needs families at the multitude of Christmas events I obsessively attend, it never even occurred to me that their experience was so dramatically different than mine.”

She continued, “I always just kind of thought 'Oh how lovely that everyone can attend the festival of trees,' thinking about how they have wheelchair ramps and wide doorways. But obviously that's such an elementary perspective.”

It was shocking to me to hear her articulate this thing that is so basic to my daily experience with Ez: The questions that swirl around the calculations of the difference between what we can physically do and what we should do in order to respect Esmé’s preferences. As I explained to Amanda, “Because just because we can participate doesn’t mean it is a way for Ez to enjoy.”

And while I try to press Esmé to have new experiences, too many gifts or too many people or too many events is overwhelming for her during an experience that should be all about fun.

Amanda then replied with a comment that she said was “stupidly obvious in retrospect,” but that is so fundamental and yet is also something that I find myself having to explain over and over and over again: “'inclusion' to me always meant 'make sure… people can do what I’m doing,' but that’s really not the point. It’s about including their needs and preferences and not just their bodies.”

Bingo. I almost cheered out loud as I read these lines.

It is so simple, and yet, so hard to explain. It continues to startle me how hard it is to implement. And it also continues to baffle me, as Esmé’s mother, with questions of where and how to draw these lines. For example, in the weeks and days leading up to Christmas, I find myself oscillating between obsessing over a way to plan for some magic — knowing that I risk stressing her further with my excitement, but might just hit the jackpot; or wanting just to retreat away from the holidays—wondering if that might just be the kindest thing for her to treat it like any other day; or being overwhelmed with anger that things are always just that much more difficult for her than for typical kids.

You see, the fact that we can wheel her through the long line to see Santa; or that the helper elves are in her visual range; or getting her a toy that stretches her, rather than fills her with the excitement of the V-Tech truck she's already destroyed 10 of isn't necessarily helping Esmé celebrate Christmas. Instead, it is inviting Esmé to join half-way into someone else's idea of what Christmas is, when what she needs is a paradigm shift.

For a child, Christmas is not supposed to be about work.

I know the spirit of Christmas magic is in Esmé. Santa visited her in school this week twice, and she was taken with him and eager to visit. Thankfully, at school it was set up in a way that she could meet him on her terms, not in a rushed exchange after a long wait in line at the mall. She worked incredibly hard to made gifts for her father and me during her occupational and speech therapy sessions, and she is so very proud of herself for doing so. I am so very proud of her for doing so. The year previous her teacher helped her select gifts for her grandparents — and her gifts were so clearly carefully chosen with them in mind.

She has worked hard to join in the image so many of us having in mind for Christmas. But it is work. And, for a child, Christmas is not supposed to be about work. It is supposed to be about being allowed to sink entirely into the joy, magic, fun, and love of the season. And, so, I think we owe it to her to meet her in the place where those things exist for her.

So this year, the bottom of our tree will not be filled with piles of wrapped boxes. Instead, Santa's elves will leave her a play scene of unwrapped toys...many of which will be the duplicates of V-tech tow trucks that have come before. My hope is that she can come in and explore slowly on her terms, without the pressure of wrapping paper, without the tension of too many toys that are difficult to play with. I know it won’t meet the image I had in my head all those Christmases ago when I was planning for this little girl. But I am hoping I will be right that it will be her best Christmas yet, because, fingers crossed, it will feel like we are celebrating on her terms. And her terms only.

More Like This
The Best Halloween Family Pajamas To Match Your Boos
What Is RSV?
Tips For Apple Picking With Kids
I’m A Mom Who Will Never Own A Home