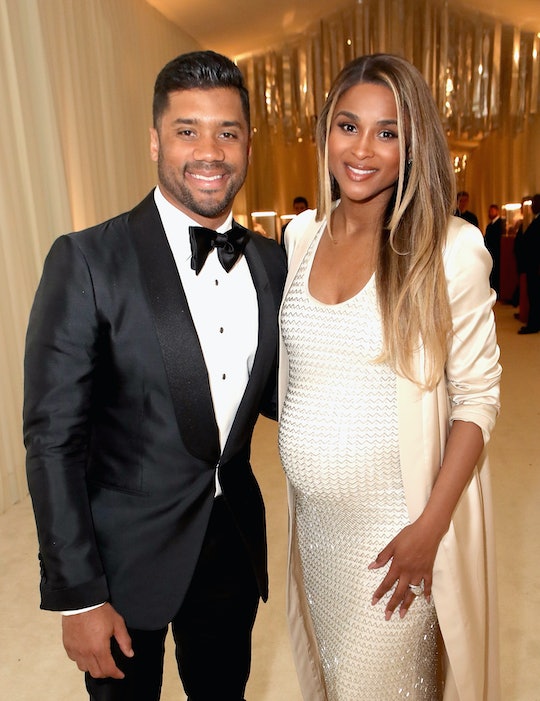 In a gloriously gorgeous Instagram post on Thursday, Ciara revealed she's pregnant with her third child. The singer shared a photo of her bare bump while on vacation that was taken by her husband, Seattle Seahawks football player, Russell Wilson.

"Number 3," the mom-to-be captioned the announcement, tagging Wilson as the photographer. In the photo, the singer's silhouette (pregnancy bump and all) can be seen on top of a mountain, standing against a stunning blue sky. It's fitting since the couple is currently on vacation in the Turks and Caicos.

Ciara's fans were, of course, excited to hear the couple's exciting news. "Yesssssssssss," one fan wrote, while another said, "Praise god."

Just recently, Ciara spoke to Extra about wanting to have more kids in the future, especially since her husband wants a big family. In November, Ciara said that they would be expanding their family at some point in the future. "Oh, you know, if you ask him, we're talking eight babies...," she said. "You know, we'll just go one day at a time, but I definitely look forward to having more kids...we got time for that."

They're well on their way to eight babies. Ciara and Wilson already have two adorable kids, 5-year-old son Future Zahir (who Ciara shares with her ex, Future) and 2-year-old daughter Sienna Princess. Three down, five more to go.

Wilson's Instagram post announcing Ciara's pregnancy was just as sweet. The football player showed Ciara's announcement from a different perspective, taking a selfie with Ciara and her bump out of focus behind him. "Number three," he also captioned his photo.

Ciara didn't share when exactly she's due or the sex of their bundle of joy, but hopefully the expectant parents will share more details about Baby #3 over the next few months and, if we're lucky, even more stunning bump photos.