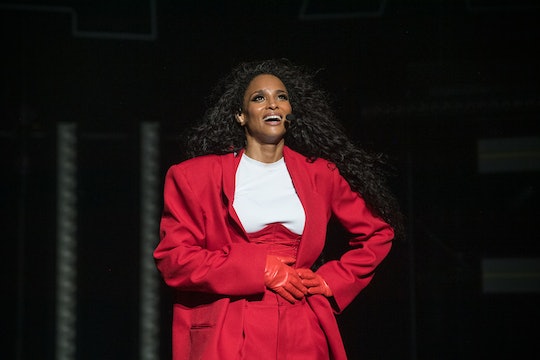 Ciara wears many hats. Not only is she a super talented musician, but she is an incredible mother to two young kids. Of course, it's only natural for the two to overlap. It should come as a no brainer that Ciara's kids know which songs will be hits before the rest of us — they have so much talent to inherit.

Ciara's two kids — 5-year-old son, Future Zahir, and 2-year-old daughter, Sienna Princess — have talent running through their veins. Future's dad is a musician, also named Future, and Princess' dad is Ciara's husband and Seattle Seahawks player, Russell Wilson. As if their mom wasn't super special enough, they have their dads take after, too.

Knowing this information, it shouldn't come as a surprise that they are capable of picking out what songs of hers will be certified smashes. During an appearance on The Ellen Show on Friday, Ciara told the show's guest host, Justin Hartley, that she has to run her songs by her two young kids before she puts them out. As it turns out, they have a secret talent for predicting which songs of hers will be certified smashes and have no problem with offering their input.

"They let me know if something is right or if it's not," she said. "And they are like, 10 for 10 with their reaction. The way you kind of know, the songs have to have the ABC element."

"So when they hear a song, and they can sing it back within the next few hours or right after hearing it, you know you're onto something right," she added.

I mean, she has a point. Kids are super opinionated about what they like and don't like. If they're not the biggest fan of what they're eating, listening to, or doing, they will be sure to find some way to let you know. And when they do like something, like a song, they will be sure to let you know by putting it on repeat (I mean, what kid wasn't obsessed with "Old Town Road" by Lil Nas X this summer?).

Anyone who follows Ciara on Instagram knows that her kids are following in her footsteps. In May, Future stole the show on the red carpet at the Billboard Music Awards when Ciara took him as her date, according to Entertainment Tonight. And when he isn't taking the red carpet by storm, Future is always dancing in videos shared to Ciara's Instagram account. Music is very clearly in his blood and he's got the moves (and rhythm) to prove it.

Ciara's daughter, Sienna, is just as much of a music lover. Like her big brother, Sienna is constantly showing off her dance moves and making her own music videos to Ciara's songs in the cutest videos posted to her Instagram account. But Sienna is already a music video star in her own right — this past May, Ciara debuted the music video for her song, "Beauty Marks" and included footage from Sienna's birth in the video.

Knowing this information, Ciara's kids were pretty much born to be stars. Given that they have fantastic taste in music and dance as well as the professionals, they're well on their way to headlining their own shows.

More Like This
Ciara’s Kids Make The Sweetest Cameo In Her New Song “Treat”
Catherine Reitman Calls It Like She Sees It: “Being A Working Mother Is Impossible”
10 Ways Prince George & Prince Louis Are So Different From Each Other
Sarah Michelle Gellar Is Facing A Terrifying Parenting Milestone: Sleep Away Camp