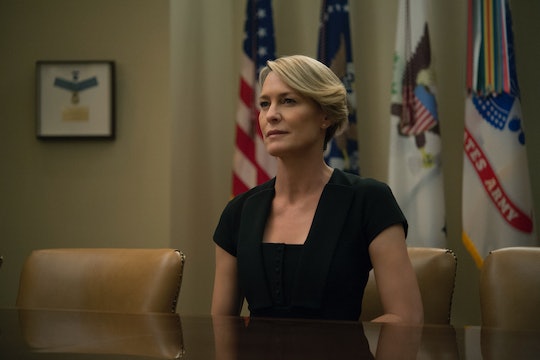 It's such a delicate game of chess. This person moves here, that person moves there, and check mate. I'm not talking about the politics of House of Cards, I'm talking about something infinitely more complicated: the marriage of Claire and Frank Underwood. (Spoilers for Season 4 of House of Cards ahead.) From where I'm sitting, Claire has just made a decisive move in the form of a note. Specifically, Claire sends Frank a note about wanting a divorce on House of Cards, and it sends a very powerful message to the President.

"For quite some time the President and I have been growing apart. We've attempted to save our marriage, but after great effort, I've come to the conclusion that it can't be saved. It is, with great regret, that I announce today I'm filing for divorce."

This is the letter Claire plans to send to the media if Frank refuses to support her bid to become his Vice President. It is a bold move and a terrible threat that could, essentially, end Frank's 2016 campaign. Since Frank made it perfectly clear in Episode 3 that he did not support the idea of Claire becoming his running mate, Claire hunkered in Texas to consider her next move. So when Leann — Claire's answer to Doug Stamper — came to her with the President's research that supports his theory that the public does not want to see her as his Vice President, Claire decided to take action. Threatening to make good on her threat from the end of Season 3.

Frank's reaction to the threat is one that we'd all probably have — he cuts off all communication in Claire's house until he can figure out his next move. That's totally something we'd all know how to do. Meanwhile, Claire was left waiting to see if this gamble would be worth it. It is an amazing exercise of power on Claire's part. At each turn, Frank and Claire are trying to be the one with the upperhand, and Claire might have just found Frank's weak spot. She might not be able to hold all of the power, but she can easily take his power away.

But, is this threat just another chess move? Is it strategy that she's hoping will pay off, or is this something that she genuinely wants in life. Power aside, can Claire actually walk away from Frank? My money is on the fact that she loves him, I can't help it — I think Claire still loves Frank. Maybe even slightly more than Doug loves Frank.