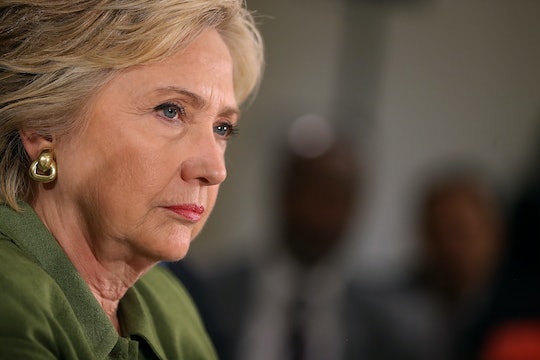 On Wednesday, GOP presidential nominee and semi-professional hate-monger Donald Trump held a press conference in Doral, Florida. In a series of unprecedented and candid remarks to reporters, Trump urged Russia to hack Hillary Clinton's email as a method of thwarting his presidential rival. Clinton's response to Trump's call for Russia to hack her email was both immediate and fierce. Trump had no issue speaking directly to cameras and reporters, actively goading America's tenuous ally into going after Clinton: "Russia, if you’re listening, I hope you’re able to find the 30,000 emails that are missing. I think you will probably be rewarded mightily by our press."

Trump even doubled down on Twitter following the press conference, suggesting Russian hackers should send Clinton's emails to the Federal Bureau of Investigation. Clinton's campaign swiftly issued the following statement:

This has to be the first time that a major presidential candidate has actively encouraged a foreign power to conduct espionage against his political opponent. That’s not hyperbole, those are just the facts. This has gone from being a matter of curiosity, and a matter of politics, to being a national security issue.

Let's take a moment to remember that Trump — a man who has called for an entry ban on Muslims to America, who wants to build a wall along the U.S.-Mexican border (and have Mexico pay for it, no less), who wants to appoint radically conservative Supreme Court Justices during his term, who said he could literally "shoot somebody and I wouldn't lose any voters," and now a man who just actively encouraged international espionage as a campaign tactic — seeks to be the leader of the free world. Let's just let that sink in for a second.

For someone who bills himself as the "law and order candidate," it certainly seems like he's willing to encourage others to break the law if it means it will benefit his candidacy during campaign season.

Clinton herself has not directly responded to Trump's statements from Wednesday as she prepares to accept her party's formal nomination on Thursday night at the Democratic National Convention in Philadelphia, Pennsylvania. It will be interesting to see if Clinton chooses to confront Trump directly in her DNC speech on Thursday as Republican speakers and Trump went after Clinton on the last night of the Republican National Convention last week in Cleveland, Ohio.

I feel like it should be fairly obvious why Trump's statement is not only ridiculous, but dangerous as well — and yet, there will be plenty of people ready to line up in support of Trump's unbelievable statements. While technically Trump's call to hack Clinton's email isn't a crime — he's protected by the First Amendment — he's opened a whole new set of campaigning tactics that goes way beyond just the customary mudslinging one expects in the run up to the general election. Trump wants to "Make America Great Again" — with Russia's illicit help, apparently.