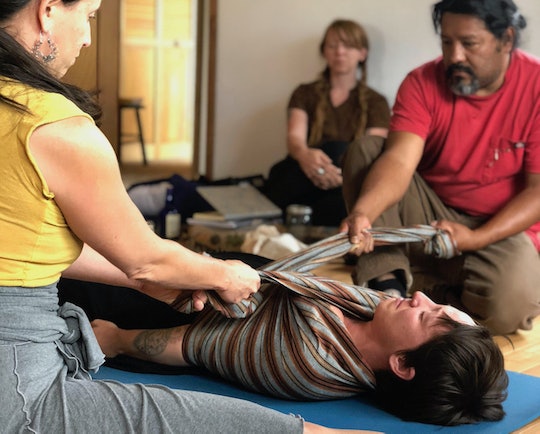 The Ceremony That Helps People Process Their Births

After a miscarriage, Stacey Ramsower, a doula, felt in turmoil. “I had this being pass through my body, but I wasn’t breastfeeding, laying in bed resting, or anything,” she says. Everything we do for mothers after birth “focuses on the physical presence of a baby,” she explains, leaving mothers who have suffered loss, or otherwise found childbirth traumatic, with no means to process the experience. Ramsower gave up attending births, until one of her teachers suggested she go through a ceremony known as “the closing of the bones,” in which trained midwives or attendants bind a person’s midsection with swaths of fabric and induce what is sometimes called “energy healing.”

In the birth community, there has been a surge of interest in closing of the bones ceremonies, accompanied by misinformation and worries of cultural appropriation. In fact, it is a multicultural practice, as Rachelle Garcia Seliga, a certified professional midwife, points out to me. Arriving in Mexico through Spanish colonization, the rebozo wrap tied around a mother’s hips has Arabian origins. The actual practice of tying a woman’s hips predates colonization in South America, with the “ayate” or “tilmàtli” used instead of the rebozo. A similar postpartum care technique called “Seven Locks” exists in Russian culture, using the rooshnik cloth, and closely resembles a Moroccan closing of the bones practice as well, along with one in Ethiopia. Those who practice the technique say it can heal both physical and psychic wounds and honor a mother’s body.

Ramsower has since conceived again, and gave birth to a son this September. She credits the healing she experienced through her ceremony with allowing her to get pregnant and have a child.

The teacher who suggested Ramsower try the ritual is Garcia Seliga, founder of Innate Traditions, who credits her mother-in-law, Clara Alfaro Peña, with teaching her the ceremony. She has also been present for closing of the bones ceremonies in Mexico. “The pelvis is meant to be closed up after birth,” says Garcia Seliga, “through an extended resting period after birth, through nutrient dense foods which facilitate tissue healing and strengthening, and through hands-on work.” She has been practicing midwifery for 17 years, and is engaged in “an ongoing study of human physiology and psychology” — that is, she believes that physical work on our bodies can help heal us emotionally as well.

Some OB-GYNs suggest that abdominal binding may help with “posture, abdominal support, and self-confidence” after birth, as Dr. Jay Goldberg, an OB-GYN in Los Angeles, told WebMD previously. Garcia Seliga teaches her clients that manual body work can help with the healing process, with a long cloth or even a practitioner’s hands helping bring muscles and fascia closer together on the abdomen.

It is deliberate physical contact that is non-goal-oriented. It was just meant for me, and that is so rare.

In addition to the physical impact of the ceremony, there are a plethora of emotional and spiritual components to the closing of the bones. Ramsower, who practices a full spectrum of sex and perinatal services at Sacred Body, says the mere fact of the ritual was powerful: “It felt like I had twenty women watching over me, I was just being held by this big group of people and it was a big emotionally cathartic moment for me,” she says. “I was just being seen by people who respected the emotional and physical impact of my loss.”

Ramsower wasn’t alone in coming to the training from a place of loss. “Most people who are attracted to this work have experienced a loss, or done some work around their own birth,” she explains, referring to people being born themselves. “The process appears so simple that I can’t really explain it in words, but it is deliberate physical contact that is non-goal-oriented. It was just meant for me, and that is so rare.”

Even breastfeeding, which is full of tactile bonding, is goal-oriented. The baby needs to eat. Ramsower describes the ritual as one of the most powerful things a postpartum woman can experience.

Beyond experiencing the ceremony, Ramsower also learned to administer it. Since her training with Garcia Seligia, Ramsower has administered the closing of the bones three times. Once for a woman who delivered vaginally, and twice for women post-abortion. “Society has this attitude when a woman has chosen an abortion that she needs to just ‘deal with it,’ but it is still a massive physical and hormonal disruption. Your body is processing something major. It is still a loss, for most people, and a choice no one wants to have to make.”

After her most recent birth, Ramsower invited a postpartum midwife/doula into her home to perform closing of the bones again, but felt led in the situation to instead undergo craniosachral therapy with her newborn — essentially a different form of touch therapy. Postpartum care, after all, is about tuning in to exactly what the woman needs to heal from her pregnancy. Ramsower hopes to continue to share the education that Garcia Seliga imparted, but sees many roadblocks to the ceremony becoming more accessible: “We already know that midwifery is severely underutilized, and midwives of color have more access to information about the practice.” Birthing centers sometimes offer a more “medical” model in hopes of legitimizing their services, she says. The same Western medicine that replaced traditional rituals in the first place.

“We are confronting a profound, collective amnesia relative to our respective cultural inheritances,” says Garcia Seliga. “The world's postpartum traditions are... rooted in our physiologic and psychologic needs as postpartum women,” she says.

That is, whether you give birth in the U.S., or Mexico, or Russia, “these needs are the same — no matter to which lineage we belong to.”

Read the next piece from Not In The Plan, essays about the unforeseen elements of birth, and the ways people recover.

More Like This
These 4 Sleeping Positions Will Keep You Comfortable After A C-Section
Here's The Best Time To Remove Your C-Section Tape
A C-Section Actually Doesn't Take As Long As You Think, According To Experts
Can The Way You Sleep Really Turn A Breech Baby?