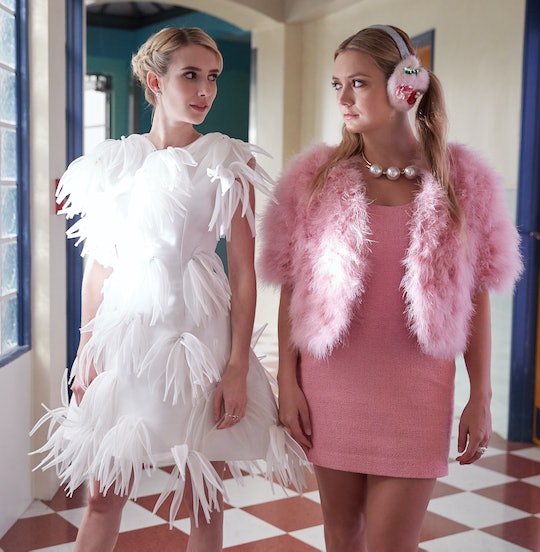 There hasn't yet been an official confirmation for Season 3 of Scream Queens, but there is still plenty of time for the Chanels to reunite like they always do and for Grace to come back in one of her awful hats. That's why these clues about Scream Queens Season 3 might help play into the idea of another season, despite less than ideal ratings for the FOX horror/comedy series. In the end, there is no show out there like it, so the chance of another season coming out isn't totally out of the question. At this point, Ryan Murphy has proven that his genius really does know absolutely no bounds, so I think it's safe to say that Season 3 of Scream Queens could definitely still happen if he wants it to.

The way Season 2 ended, with everyone kind of doing their own thing, it's not totally clear what the new season could be about, but there were some clues peppered in toward the end of the season that make another installment a real possibility. Unfortunately, there was no official downfall of the Chanels. In fact, it's getting really hard to root for anyone on Scream Queens because of their mirrored awful personalities. But the clues about Season 3 of Scream Queens are just clear enough to give viewers hope that they could be involved in some way once/if the show is officially renewed. For example...

The best clue for a Season 3 at all was the fact that the Red Devil came back and seemed out for Chanel Oberlin's blood. But what's even better is that, with the KKT ring waiting for her in her car, it means that the killer would have a direct link to Chanel or the sorority house in general. So this could very well be Grace, finally back for revenge, not just for herself, but for her father, who died in that awful hot oil bath.

The American Horror Story Season Themes Line Up So Far

Yes, she was sucked into the cleverly placed quicksand where the swamp once was, but you never actually saw Nurse Hoffel's dead body. If she's still alive, there's no reason that she couldn't come back as a killer again, only this time she could have her own costume rather than piggybacking on someone else's.

There Are Two Possible New Settings That Could Work

Since there wouldn't likely be another season set at a hospital, there were two new settings that were introduced before Season 2 wrapped up. There was the set of Chanel's new show, which could make for a creepy Scream 3-esque murder spot, or Blood Island, where Hester and Dr. Brock Holt ran off to. The island is mentioned multiple times throughout the season and if they're going to give viewers a new location for Season 3, it definitely hasn't been done yet on the series.

There hasn't been an announcement yet confirming Scream Queens will be back in any capacity, but if FOX opts to give it another renewal, there is no shortage of directions in which the show could take things.