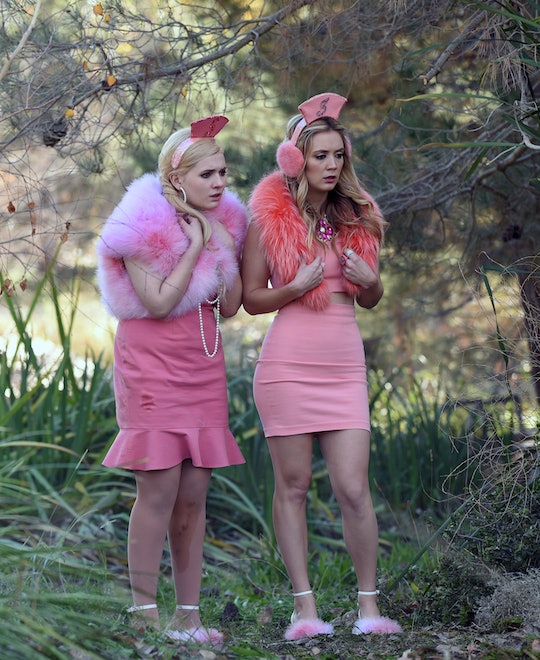 Will 'Scream Queens' Return For Season 3? The Chanels May Have Run Their Course

This time last season, approaching the season finale of Scream Queens, viewers were amped up with the excitement of finding out the identity of the killer or killers, while hoping for a resolved ending with answers to their many questions. But right now, as the Season 2 finale of Scream Queens gets closer, fans aren't exactly chomping at the bit since so much has already been revealed. So will Scream Queens return for Season 3? The Chanels may have actually been the show's undoing and by now, their novelty is wearing pretty thin.

Season 2 began strong enough, with a whole new serial killer storyline and a new costumed devil killer, this time in a green outfit and mask with the name of the Green Meanie instead of the Red Devil. The similarities were painstakingly obvious, but there was still a bit of intrigue to the new plot and a way for the season to stand on its own. But after pretty much everything was revealed in the penultimate episode (to the audience anyway) and solidified that Nurse Hoffel and Cassidy Cascade were the only two killers left, what else is there to wonder about?

Crazier things have happened though, so there might still be some surprises for the writers to pull out before the season is over.

According to TVSeriesFinale.com, the ratings for Scream Queens have been on a steady decline since the season premiere and now average in at around 1 million viewers per week. That might sound like a lot, but it actually makes Scream Queens the lowest rated show on the network and for a Ryan Murphy series, that's very surprising to hear. It might have something to do with dropping the gun on all of the Season 2 secrets that could have been kept quiet until closer to the end, or the fact that the Chanels aren't charming or even quirky anymore. (And the days of loving to hate them are kind of done too.) Nowadays I feel almost nothing for the vapid former sorority girls.

Although FOX hasn't given an answer yet as to whether or not there will be a Scream Queens Season 3, if there is, the show is going to have to rethink its formula. After having a unique first season that was unlike any other show on the network, the show continued in the same format, but in this case, that wasn't the best idea.

As ScreenerTV.com reports, the best part about the Chanels this season has actually been the former wannabe Chanel, Hester (Lea Michelle), who is Scream Queens' resident sociopath. Despite being inherently evil and basically crazy, Hester has been a beacon of light in a series that has taken the three most awful characters and somehow made them the spotlight of the second season. Could a Season 3 of Scream Queens, possibly with Hester at the forefront, be the key to bring the show back to its former Season 1 glory?

There is still no official word yet on a Season 3 confirmation, but if Uncle Jesse can't help a show bring up its ratings, then it's hard to know what will.