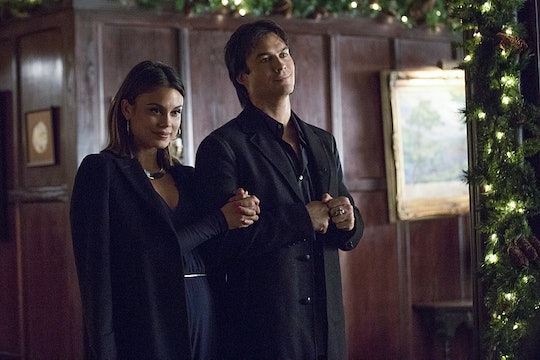 Clues Damon Isn't Dead On 'The Vampire Diaries,' So Don't Panic Just Yet

It was a moment of total devastation when viewers watch Alaric stake Damon during last Friday's episode of TVD. It was almost like watching him kill their entire epic bromance throughout the series. And while many of you have probably found yourselves worrying about Damon's fate, let me help put your mind at ease. Because, based on everything I've seen, there are distinct clues that Damon isn't dead on The Vampire Diaries after all. In fact, they seem to prove that he's very much alive and it's all thanks to... Cade?

By all accounts, a stake through the heart is supposed to kill any given vampire — unless you're part of the Original family, the Mikaelsons. And seeing Damon's face turn that grey-ish dead color was more than a little chilling. So then why am I so certain that this Salvatore brother's days aren't numbered? Though I can't confirm this to be the case of now, I'm relatively sure it has a little something to do with the recent agreement both Damon and Stefan made with Cade, which means this new arrangement couldn't have come at a better time. After all, they say that if you make a deal with the devil, you're going to get burned — but not staked. Let me elaborate...

Like I said, this is just a theory for now, but one clue that suggests Damon isn't actually dead is the fact that Cade just recently made both he and Stefan immortal. Granted, vampires are already supposed to be immortal to begin with, but I'm talking about a level of immortality that doesn't have any weaknesses. While a vampire's everlasting life could still come to an end if they're staked, maybe as Cade's new sirens, Stefan and Damon no longer have those vulnerabilities. Which would mean that even though he looks dead now, he's going to be able to recover from the attack fairly quickly.

He's Featured Heavily In The Promo

This is no flashback scenario here and I know that because Sybil is also shown as well, proving that this is happening in the present day. So if Damon is coming to bring holiday cheer to the Salvatore mansion, then he logically has to be alive to do so. (Well, as alive as any vampire can be.) So that in and of itself is very reassuring.

His Continued Existence Is Outright Stated

"Well, Damon's alive and Stefan's dead," Caroline remarks in the same promo clip. "Merry Christmas, I've got gifts." Man, I love her. But this time it's not just because she's Caroline and therefore amazing. It's also because she confirmed what we've all been worrying about — that Damon is alive and well. (Maybe not "well" in the sense that he's now working for the devil and killing tons of people in the process, but you know what I mean.)

So unless Julie Plec throws us a major curveball that could explain away all of these various clues that Damon isn't dead, I'm going to go ahead and consider this mystery solved. Ian Somerhalder has been a long-time star of the show. He has to make it to the very end of the series. Right?