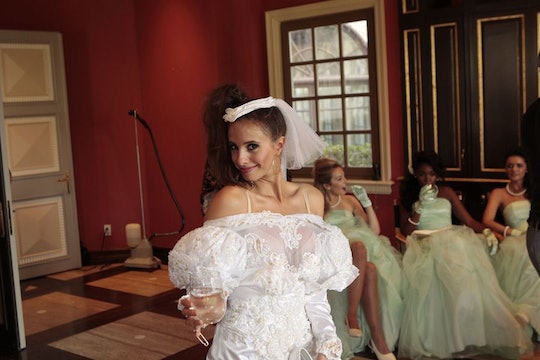 Now that Bachelor fans everywhere have their fantasy brackets in place and totally filled out, it's time to speculate on who is end game for Nick Viall. And while Corinne may have already won him over with her brazen personality and Rachel got the first impression rose, there are still a few others under the radar who fans are rooting for, like Canadian special education teacher Vanessa Grimaldi. And there are plenty of clues on Vanessa's Instagram that prove the Bachelor contestant might be the perfect match for Nick.

Granted, her most recent posts are from when The Bachelor Season 21 premiered, but it's almost better that her photos show that the other contestants and the promotions and tea cleanse ads haven't gotten to her yet. Now, I should start out by saying that the clues on Vanessa's Instagram that hint at her potential victory over Nick's heart aren't as cut and dry as we would like. Obviously, there aren't any photos of her and Nick together being a couple because that would kinda give things away (but OMG, could you even imagine?). Instead, her photos tell the story of a Bachelor contestant who totally seems like a real person and who would, in the end, make a great match for Nick, who has said time and again how much he's ready and looking for love and an actual commitment.

Making out with gorgeous contestants on The Bachelor might be fun for the first couple of weeks, but at some point, Nick will have to begin narrowing down his choices to candidates who he can really see himself with long-term. And Vanessa is honestly one of the more obvious options. For example...

From videos of Vanessa performing random butt-shaking dances to the shtick of pretending to take the elevator in a kitchen, it's clear that she has a great sense of humor and is all about enjoying life. And while Nick's humor is sometimes the result of his awkwardness, he's obviously one of the more light hearted Bachelors too, so you know they'd have a lot of fun together.

One of the biggest things about Nick is that he's big on his family. He comes from a big family full of brothers and sisters, who he's close to, so family is obviously important to him. Judging by the the many photos and videos of Vanessa with her nephews and captions about her close-knit family, it's just as important to her. Kind of perfect, right?

She Seems Close To Her Younger Brother

Since Nick's beginnings in Bachelor Nation, Nick has shown an endearing relationship with his little sister. And like that combination, Vanessa seems to have a close relationship with her younger sibling. In one of her many funny Instagram videos, Vanessa is filming her little brother making food for her as she nurses a cold.

Although lately Nick's own Instagram is all about his travels as he takes interviews and promotes The Bachelor, he also has a few important pictures of his dog. And, of course, so does Vanessa. In fact, on Vanessa's Instagram, she even has a shot of her and her pup watching The Bachelor together. Now, it's just a matter of blending the fur families together.

She Doesn't Take Herself Too Seriously

And neither does Nick, really. Not only is Nick that brand of adorably awkward that is super appealing, but he also doesn't put on an act regarding who he is. Nick is down to earth and judging by Vanessa's Instagram, so is she.

There hasn't been much time yet to be sure of Nick ending up with Vanessa on The Bachelor, but the clues on her Instagram show their similarities make her a top candidate for that final rose and Neil Lane ring.