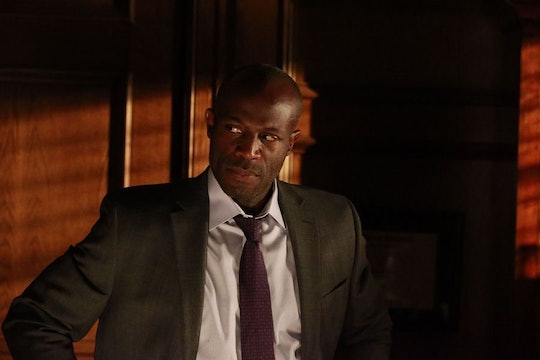 Nate May Not Be As Guilty As He Seems On 'HTGAWM'

If there's one thing that How to Get Away With Murder doesn't do, it's make things obvious for viewers or do too much hand holding as far as plot revelations are concerned. Honestly that's the way it should be, even in regards to Nate, since right now he is suspect number one of being Wes' murderer. But the clues that Nate didn't kill Wes on How to Get Away With Murder are clear enough to clear his name, in my opinion.

Right now, fans know that one of the last people to see Wes alive was Nate since we saw them both in Annalise's house on the night of the fire. But if Nate killed Wes, that's way too obvious right now. And the show just returned from its winter break with plenty of episodes left to have the mystery of Wes's killer slowly revealed. It makes little sense to reveal such an obvious suspect now in the form of Nate, who has been one of the good guys for the most part.

OK, so he may have fallen under Annalise's control too many times to count, but since good and bad on HTGAWM is so fluid, let's just say that Nate is good by the show's general standards. So having him kill one of the other good guys on the show doesn't make sense and doesn't do much for the show overall. Plus the writers seem to want us to suspect him, which automatically makes hi innocent in my mind. In fact, the clues that Nate didn't kill Wes on HTGAWM are hard to ignore.

Nate's Conversation With The Medical Examiner

When Nate spoke to the medical examiner about Wes' body and his cause of death, he seemed genuinely surprised by the fact that she went back and said that his death was caused by the fire when prior to that she'd claimed he was dead before the fire ever occurred. If this was a conversation in front of important people, then it would possible that he was just putting on a show. But this is an interaction that shouldn't have even happened, so Nate had nothing to gain from any feigned surprise.

It Would Be Too Obvious

HTGAWM has been back for just a few episodes and if Nate killed Wes, then it's way too soon for Nate to even be suspected. The big mysteries of each season have ended in surprise from viewers at having never suspected the culprit or knowing how the crime actually went down, so there's no reason to suggest that it will be any different this time around. And if Nate killed Wes, there wouldn't already be so much suspicion on him yet.

It's possible that one of Annalise's enemies killed Wes to frame her and get back at her for one of the many bad deeds she's done in the past. She might not be Nate's favorite person in the world right now, but of all of the other enemies she still has (Catherine Hapstall, Eggs 911 a.k.a. Levi, and yes the Mahoneys), Nate is the least likely to do something like this.

They Keep Bringing Up The Mahoneys

The Mahoneys were a big part of a couple of different plots on HTGAWM, but it's like the show wants viewers to keep remembering that fact. The name has been brought up at least once per episode lately, and there's no way they won't revisit the fact that Wes' father was Wallace Mahoney. If ever there was a clearer suspect than Nate in the death of Wes on HTGAWM, it would be the Mahoney family.

He's Been The Moral Compass Of The Show

Again, it's not that Nate is inherently good or that he hasn't succumbed to corruption a few dozen times, but the good people and the bad ones on HTGAWM are, at best, different shades of grey. And when you look at it like that, Nate is on the much lighter end of the innocent spectrum. He has never been a fan of Annalise's ways of working with her students and because of his own conscience, would never kill one of them, let alone Wes.

Nate didn't kill Wes on HTGAWM because he just doesn't have it in him to hurt someone who deserves it the least out of everyone. Obviously there's much more to the story of Nate and Wes meeting at Annalise's house, but it wasn't so Nate could kill him. Mark my words.