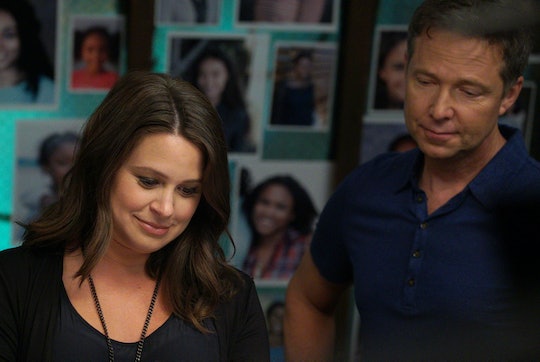 Quinn May Really Be Dead On 'Scandal' & These Clues Prove It

You probably shouldn't kill off a fan favorite if you want your TV show to continue to succeed, but once you hit what you know is the final season, all bets are off. In Scandal’s case, that could mean that Quinn was indeed killed by Eli Pope in order to gain back control of B613. It might not be the best explanation for kidnapping a pregnant woman on her wedding day, but the clues Quinn is dead on Scandal are hard to ignore at this point. Sure, they could all be red herrings, especially since this is a primetime drama, but like I said, you can't put it past writers to do something shocking like kill off main characters in the final season. Just ask the writers and producers behind Dexter and Buffy the Vampire Slayer.

Unfortunately, the actress who plays Quinn, Katie Lowes, isn't giving out any teasers about her character's fate. In fact, her social media accounts give nothing away, except for a recent selfie she took with Kerry Washington (Olivia) and Bellamy Young (Mellie), which may indicate she's still on set. But then again, that could just be to throw us off the scent or to hype fans up for Scandal’s return on Jan. 18, even if Lowes isn't in it. As one fan commented on the photo, "Girl don't confuse us, you died," so it definitely wouldn't be surprising to learn that although viewers didn't see Quinn’s death on-screen, there’s a very real possibility that she was still killed. And much like the bodies on Scandal, the clues Quinn is dead are starting to pile up as well. For example...

The Scream Heard In The Episode

The biggest clue that might tell us of Quinn’s fate on Scandal is probably the scream heard when Rowan went into another room of his house in the mid-season finale, which was followed by a gunshot. He returned to the living room and asked Olivia if she would like to see the body. I know, if Game of Thrones has taught us anything, it's that you can’t trust a murder scene unless you see the character actually die, but I also don’t think any Gladiator would want to see a very pregnant Quinn shot dead on-screen.

Over the course of the first half of the season, there was a big tug-of-war going on with people like Rowan and Fitz trying to break Olivia out of her cold demeanor that came along with all of her newfound power. Although Rowan also really wants to be Command again, he would also do anything to save his only child, so sacrificing someone else’s life in order to get Olivia back to her old self is something he would totally do.

Lowes Just Had Her Baby

In real life, it was expected that Lowes would take some time off to enjoy motherhood and be with her new baby. But since it’s also the end of the last season ever, who’s to say that Shonda Rhimes simply didn’t decide to allow her to have the rest of the season off and work that into the storyline for an explosive and intense final season?

This Is The Final Season, So Anything Can Happen

There isn't going to be another season to show the remaining characters picking up the pieces or trying to live their lives again. This is it for Scandal and although it would be heartbreaking for Quinn to actually be dead, there’s nothing to lose by going through with such a tragic fate for the character.

Shortly after Scandal’s mid-season finale, both Rhimes and Lowes took to Twitter to commend each other and the show for a season well done so far. Lowes wrote "Thank you to the @ScandalWriters @shondarhimes for this time with my baby. And for Quinn," while adding "Can’t even tell you how much I miss my #Scandal Fam." That definitely makes it seem like that was the end of both Lowes and Quinn as far as Scandal is concerned. And it certainly didn't help that Rhimes posted her own tweet that basically alluded to the same thing. "It’s the final season you guys, you know we had to go all out. We are happy that @KatieQLowes can have this time with her baby. #scandalfinalseason," she wrote. I have a bad feeling about this.

The Scandal Sneak Peek Is Telling

In a sneak peek of Scandal’s returning episode, aptly titled "Robin," you see Rowan drive his car to a deserted parking lot, open the trunk, drop in a match, and allow the car to be set ablaze. Again, this could be to totally throw viewers off the scent, but the way he opened the trunk and looked inside, it was as though he was looking at a body.

Although these clues about Quinn’s death on Scandal could all be leading up to the big reveal and confirmation of our favorite Gladiator’s untimely demise, let’s not forget that shortly before Quinn went missing, she was also fully against the person Olivia was becoming. So it's also possible for her to be working with Rowan on this ploy.

Then again, that would also have to mean that both Charlie and Huck are in on it because I can't see her purposely putting them through such turmoil, and that’s too many people involved to really make the plan work. Until there’s a body, a legitimate confession, or the sight of Quinn popping out in a "gotcha" moment, anything is possible.