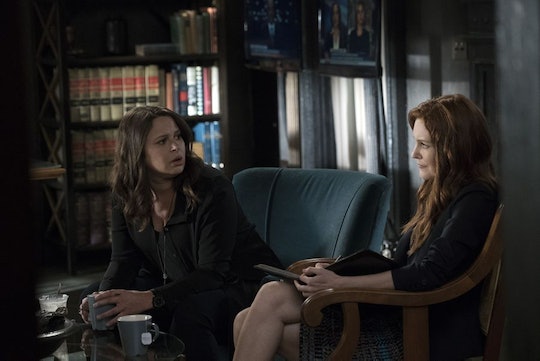 The final season of Scandal wouldn't be complete without a totally epic winter finale. So when it was confirmed at the end of last week that Quinn had been abducted, I knew it was time to start preparing for the worst. But is Quinn dead on Scandal? She’s still missing, so as of right now in Olivia Pope’s universe, Quinn’s fate is still very much up in the air. Could that eventually result in her death? Absolutely, but I certainly hope that's not the case.

The whole debacle started when she confronted Olivia about Rashad’s plane explosion and demanded that Olivia tell someone the truth about her involvement in killing the Bashrani president and his niece, Yasmin. Of course, Olivia denied her part because why give yourself up in a conspiracy like that? Instead, she told Quinn to focus on her impending nuptials and as Quinn said herself, marrying Charlie and raising their child together was never something she was worried about.

So when she didn't show up to their wedding the following day, it was more than cause for concern, especially since Quinn also knew that Olivia was responsible for Rashad and Yasmin’s deaths. Right now, it’s a case of whodunnit, with Quinn's abductor still at large and unknown, but as the clock ticks and there’s no clear sign of her, it’s also a matter of whether or not she’s even alive anymore.

Even though a character death of this magnitude would give a lot of weight and shock value to the winter finale of Scandal’s final season, I don’t see the show ending with Quinn, or really anyone of QPA, dead. She’s been a fixture from the start of the show and in the beginning, acted as the eyes and ears of fans, seeing and experiencing Olivia and Scandal’s Washington, D.C. for the first time. At the time, she was more than necessary for that tool and while now it’s almost like all bets are off since it’s the last season, it also doesn’t do much for the season’s plot to kill Quinn off right now.

Technically speaking, if Quinn is dead, then that leaves the remainder of the season to deal with mourning the loss of her (and her baby, since she’s very far along in her pregnancy now) and figuring out who did it. With the start of Season 7 more about Rowan and Fitz’s struggle to help Olivia get back to her old self, the writers likely wouldn’t center the final season’s main plot around someone else.

That being said, there are a number of suspects who could have taken Quinn. Judging by her nervous demeanor and straight up visible fear, Olivia could be involved in whatever happened to Quinn, in order to silence her, but not kill her. Instead, it could have been more about convincing her to stay quiet through psychological tactics rather than physical harm.

Or, Jake could have been behind it unbeknownst to Olivia. He's aware that Quinn knows too much and if Jake did take her, it could be a wakeup call for Olivia to come back to the white hats. Then again, Quinn may have worked something out with Rowan or Fitz and is holed up somewhere waiting for Olivia to panic and confess her part in the plane explosion. Or, at the very least, dissolve B613 once and for all. It still doesn't excuse the obvious pain Charlie’s had to endure through this whole ordeal, but it would lead to a better outcome if Quinn is actually behind her own kidnapping. (Plus, that kind of twist is totally something Scandal would do.)

Whether or not Quinn was kidnapped or arranged this ploy herself, I don’t see the head of QPA leaving the show in a body bag. As a Scandal OG, she has a certain amount of plot armor to protect her and I like to think/hope/pray that it’s enough to keep Quinn in the game until the end. The alternative is too much to bear.