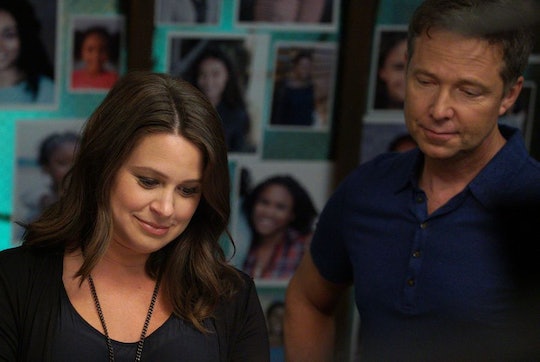 Quinn Is In Serious Danger On 'Scandal'

Just when we all thought someone on Scandal was going to get some semblance of a happily ever after, Quinn turned up missing on "Vampires and Bloodsuckers," the penultimate episode of the first part of Season 7. At first, it seemed like she might have been a runaway bride, but it became obvious that someone actually took her. So, who kidnapped Quinn on Scandal? Her life might be in danger right now, but it also depends on who abducted her.

If it was a hired assassin, for example, then Quinn may not stand a chance, even if she’s a killer herself. But if Olivia facilitated Quinn’s kidnapping, it could be more about convincing her to keep her mouth shut about the death of the Bashrani president rather than killing her to keep her quiet. In Quinn's meeting with Olivia before she turned up missing, Quinn seemed like she was on a mission to leak the truth about Olivia and Jake’s part in blowing up the plane that had both the president of Bashran and his niece inside of it.

But at the end of the episode, scrambled security footage showed Quinn arriving at QPA for her wedding after all. This meant that not only had she not made plans to spill the story, but she’d also arrived on time for her wedding. That being said, it also confirmed that someone took Quinn against her will and since this is Scandal’s final season, I'm inclined to believe that no one is safe from death.

Although I don’t believe that Olivia would actually kill Quinn, she could have been behind the kidnapping regardless. Throughout the search, Olivia seemed visibly shaken, more so than she’s ever been before. This could have been over worry, sure, but it could have also been some regret or fear that she would be caught as the person who organized Quinn’s kidnapping.

That also leads us to Jake, who may have worked with Olivia in setting up the kidnapping. He is, after all, her right hand B613 man at the moment. Jake may have also had a part in the kidnapping on his own, without Olivia’s help at all. If Olivia told him everything that Quinn knows, then he knew how much of a liability Quinn had become. And if that’s the case, then he might have taken matters into his own hands and had Quinn kidnapped. It could also be the thing to help Olivia come back to the good side of things if she learns that Jake went behind her back to do it.

Rowan is another suspect who’s pretty high up the latter of suspicious characters. He probably doesn’t care about the death of the Bashrani president or what Quinn knows, but he likely has been looking for a way to fire back at Olivia for the control she’s lorded over him. But on a completely different end of the spectrum, could Quinn be faking the whole thing in some elaborate effort to get Olivia to admit the part she played in the plane explosion? Quinn might not have planned to hurt Charlie in that way, but nothing is really out of the question right now.

This isn’t the first time in recent seasons that a core member of the Scandal cast has been kidnapped, though. During Season 6, Huck was taken and almost killed by his girlfriend Meg before Olivia and company found him. Even earlier in the series, Olivia had her own kidnapping ordeal, so maybe it’s just a Scandal rite of passage?

Honestly, I don’t know if Scandal would go as far as to let a pregnant woman die, but if she was kidnapped because of what she knows, then there isn’t really a way out of it unless her captor (or captors) are killed instead.