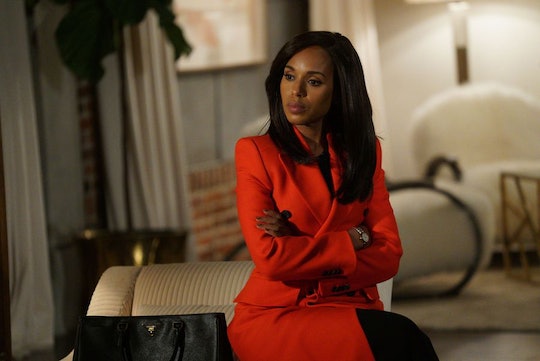 Because nothing can ever go right in the world run by Olivia Pope on Scandal, the last few seconds of Thursday's episode were shrouded in tragedy. Just as President Rashad's niece was about to fly back home to Bashran, her plane blew up on the tarmac, leaving Charlie and Quinn to stare on in horror. But who blew up the plane on Scandal? Olivia might know who's behind the incident, even if it wasn't her.

For the majority of the episode, the focus on Rashad's niece dealt with the need to keep her at QPA, safe and hidden from any rebels from their home country who might want to hurt or kidnap her in order to get to Rashad. So naturally, the first thought that comes to mind is that someone like that is behind the plane blowing up on Scandal Thursday night. But because it's also the most obvious answer, there's a good chance that it's not as simple as that.

Even if watching Mellie try to negotiate a nuclear weapons treaty started to deter from the excitement of past seasons that fans have come to expect, it might have all been done so that the plane exploding could be an important part of one of the storylines moving forward this season. Which would mean that whoever blew up the plane must be someone viewers already know, and there are a few who could be behind it.

After gaining more power than she's ever had before, Olivia has become someone almost unrecognizable at times, and someone who is intent on keeping nearly everyone in her life right under her thumb to control. Once upon a time, this was OK, since she was also fighting for the good guys, but it's becoming increasingly clear that she needs to get a grip. That being said, I wouldn't put it past Olivia to have the plane blown up on Scandal.

She was against Mellie wanting to sign the treaty with Bashran and against helping Rashad in general all this time and finally she agreed to do what Mellie wanted in exchange for Mellie officially kicking Fitz out of Washington. But Olivia is Command now and she gets what she wants without having to give anything in return, so it's entirely possible that she had the plane blown up to thwart Mellie's plans and to get what she wanted from the start.

We also can't forget Papa Pope, because Rowan might be under Olivia's control, but a part of him came out tonight that hasn't been seen with Olivia in a while. After she took away his dinosaur bones and basically shunned him from speaking to her, he finally blew up on her about doing everything she's asked and getting nothing in return. To that, Olivia replied, "Who you are, what you have become, every single thing about you makes me sad."

Could Rowan have decided to get back at his daughter by blowing up Rashad's plane on Scandal? It wouldn't be the first time Rowan was involved in an airplane attack, since he was the one who ordered Fitz to shoot down an aircraft carrying 300 innocent people in Operation Remington. Rowan can only take so much before he attacks Olivia in some way, especially since his efforts to try and help her come back from the dark side, so to speak, have been futile.

Olivia's path into darkness has been getting deeper with each episode of Scandal's final season and I don't know if this hit on someone important to Mellie is going to be a wakeup call or cause for more action as Command if Olivia really isn't behind the plane blowing up. But whoever organized the vicious act no doubt has some serious motives that will likely play out in the episodes to come.