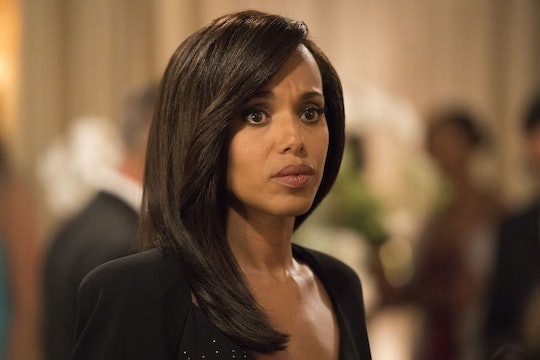 In the first few months of Mellie's presidency and Olivia's time as Command on Scandal, Olivia kept a close eye on both her father and Fitz to make sure they were staying in line. But now that Jake likely told her about Rowan's meeting with Fitz, what does Olivia want with Rowan on Scandal? As Command, she holds all the power, unlike seasons before, when the roles were very much reversed. And how she goes about getting whatever she wants out of her father now will say a lot about the person she's becoming and whether or not she can wear that white hat again.

When Rowan visited Fitz in Vermont, he seemed terrified of being caught by Olivia and made it a point to say that he had to get back home by morning or she'd know he was gone. And although he didn't quite say what the ramifications of missing curfew would be for him, Rowan made it clear that Olivia is in charge of pretty much everyone now.

So when she rolled a stool over to him at the end of Thursday's episode of Scandal and told him that they should talk, it seemed like she now knows exactly what's been going on behind her back as far as Rowan and Fitz's secret meetings go. And something tells me that Olivia is not going to stand for being taken for a fool. So what will Olivia want from Rowan on Scandal now that she very likely knows?

Although Olivia has been dangerously close to ditching her white hat altogether, I highly doubt that she'd have Rowan killed or tortured, even though those are both celebrated hobbies of agents in B613. As of right now, she may not even know the nature of Rowan's conversations with Fitz, but simply that they've been meeting behind her back.

However, after Rowan's speech to Olivia about how she should disband B613 once and for all and leave her place as Command, she has to know the nature of their conversations. But Olivia is smart enough to realize that she could use Rowan another way in order to warn Fitz that she's not about to be reigned in.

If what Olivia does to Rowan on Scandal is something bad, like final season of an intense political drama so anything goes kind of bad, then Rowan will have been right about her crossing over to the dark side and there could be no bringing her back, just as he'd feared. Because of that, I don't see Olivia murdering her own father, but she clearly knows what's going on and that he's been lying to her again, as he'd done when he was Command back in the day. I guess old habits die hard.

Meeting with Rowan at the end of Scandal Thursday night wasn't about confronting him to torture him, even though that would be a very B613-like thing to do. But personally, I think it all comes down to Olivia doing one of two things. Either she'll send him to the island he convinced her to run away to a few seasons ago, or she'll use him to manipulate Fitz, since she obviously knows that he's a part of it all too. Neither are very good scenarios, since we actually need Papa Pope for once, but both would prove that Olivia isn't as far gone as she could be, or as Rowan had feared she is.