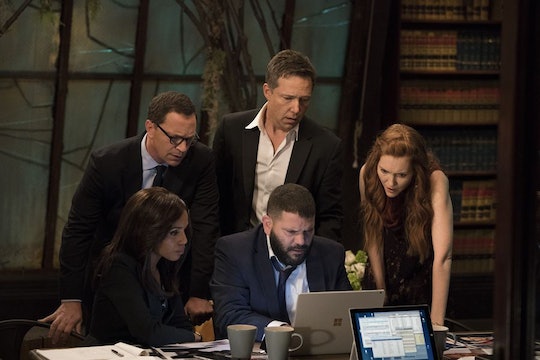 'Scandal' Is About To Go On A Long Hiatus

Primetime TV shows going on break during the holiday season is nothing new, but these days, we now have official winter finales to look forward to, so that’s definitely progress. Now that all of the TGIT shows on ABC are about to go on break as well, though, fans are no doubt going to be asking, when does Scandal return from its winter hiatus?

Update: Shortly after this article was published, ABC announced that Scandal would return on Thursday, Jan. 18.

Earlier: Sadly, it’s probably going to be a long break in between new episodes of the final season of everyone’s favorite Shondaland political drama. Although there hasn't been an official return date listed anywhere yet, past seasons tell us that Scandal won't come back until January or even as late as February.

In all fairness, this gives viewers the chance to enjoy the holidays without falling behind on the show, but it also means that there will likely be at least two months without Olivia’s fast talking speeches, Huck’s sad and brooding eyes, and Mellie’s badass presidential moves. On the plus side, the winter finale is always full of the kinds of suspense and jaw-dropping moments that you’ll find in actual season finales, so at least there’s that. Last season, Scandal returned as a midseason show and premiered in January instead of the usual fall premiere date, so the breaks were a bit different for Season 6.

Before that, though, Season 5 premiered in September 2015 and the winter finale aired in November. Scandal didn’t return until February 2016 that season, so if the Season 7 winter break is similar to that time frame, then we’re looking at a return date in February 2018. (I know, that’s a depressing thought.)

If it’s any consolation, the last season of Grey’s Anatomy, — which seems to be on a similar airdate schedule as Scandal this season — returned from its winter hiatus at the end of January 2017. So there’s definitely hope that Scandal will be back from its break in January as opposed to February. But really any way you look at it, being without new episodes of Scandal for several weeks isn't going to be easy, especially since it’s the final season.

When it does returns, there will likely be more of Olivia’s inner struggle to be Command and head B613 while also holding onto her weak ties with QPA and serving Mellie as her Chief of Staff. But since Scandal is nothing if not climactic, there will probably be a midseason finale cliffhanger to tide fans over with worry and theories until it comes back after the break. As long as Quinn is alive and married to Charlie, though, I’ll be plenty satisfied with whatever new plot is devised to play out for the remainder of the season.

As far as where Olivia will stand come the second half of the season, Scott Foley (who plays Jake) spoke to Variety at the beginning of the season about what Jake and Olivia’s relationship would be like in the final season. And while they’ve been playing nice so far, it probably wouldn't take much for things to go south — especially if Olivia makes a grab for her white hat. "[Jake is] standing by her, supporting her, but he’s very ready to step in should something go wrong," Foley said. "It’s a delicate balance. She is now his boss, so Jake is doing his best to be very cautious with both how he and she proceed at this point. This is new territory, new ground, and it’s going to be very dangerous."

So could this mean that after the winter hiatus, Jake might be one of the only dedicated members of B613 left? He would definitely make a good adversary, provided of course that Olivia actually comes back from the dark side. But before any new storylines get to pop up, we’ll have to get through a long winter hiatus first.