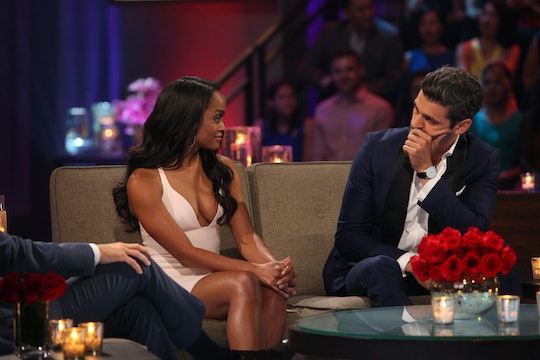 The finale of The Bachelorette wasn't quite like any finale from any of the previous seasons of the show, and not just because it departed from the traditional format by intercutting the live discussions with the actual episode. It was a (drink every time someone says it!) frustrating experience that undercut Rachel's fairytale romance ending to focus primarily on a breakup with Peter that felt far from finished. Their emotional end coupled with their uncomfortable reunion had some fans wondering if there was still something there. The clues that Rachel might still be in love with Peter from The Bachelorette could indicate that there was.

But, of course, it's all total speculation. Bryan felt like a lock to win in part because Rachel was so into him over the course of the season. She gave him the first impression rose the very first night, and didn't waver much in her interest in him (despite audiences not being quite so won over). She seemed excited about Bryan and the proposal, but positioning it right after her deeply heartbreaking breakup with Peter made the happy ending feel like more of a footnote. Fans ought to take Rachel's word for it above anything else because she's the only one who truly knows how she feels and what she wants — but there definitely appeared to be some lingering emotions with Peter.

It's difficult to point at specific clues as hard evidence when the situation between Rachel and Peter is one full of messy feelings. But the fact that all those feelings still existed could be telling. Compare Eric and Rachel's mature, amicable breakup with her breakup with Peter: they couldn't be more different, and that's because her feelings for Peter were stronger.

Rachel said as much when she said goodbye to Eric, and the rest of the episode upheld that statement. She and Peter didn't break up because they didn't love each other, it was because they weren't on the same page about their future. They were exchanging loving sentiments and nonstop kissing amidst tears up until she walked out the door for good. And that was just a few months ago. When feelings are that intense, turning them off immediately isn't easy to do.

Comparing the relationships on The Bachelorette is inevitable, and that's partially what makes some fans so certain that Rachel might still have feelings for Peter. Just as her friendly goodbye to Eric made it clear she felt more for Peter and Bryan, comparing Bryan's proposal to Peter's breakup also felt revealing. Whereas the breakup felt very authentic because of how raw it was, the proposal was like any other Bachelorette romcom moment.

During Rachel and Peter's reunion, they were both visibly upset and he admitted that he still cared about her. It was a tense conversation that didn't appear to help either of them move on; it only served to highlight how much they still may feel for each other. Though Rachel is definitely set on her relationship with Bryan, Peter was still a sore spot for her.

It's not clear whether what Rachel feels for Peter currently is love (it could just be more of the same frustration), but the finale made it seem like there was still something there.