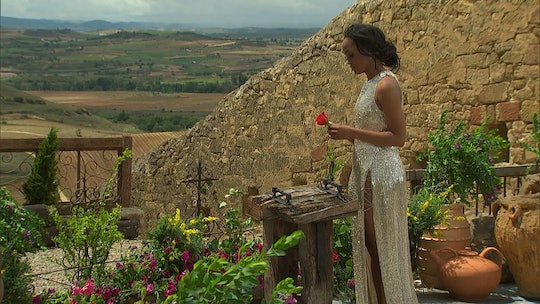 The crux of Rachel Lindsay's drama as her season of The Bachelorette wound down was Peter Kraus and his very vocal reluctance to propose at the end. Rachel was deeply adamant about wanting a ring on her finger after giving out her final rose. She had previously spent five years in a relationship that stalled out and never went anywhere, and she was understandably fearful that the same thing might happen if she chooses someone who puts her in the girlfriend zone again. So why did Rachel and Peter break up on The Bachelorette? Their diametrically opposed views of engagement just weren't reconcilable in the end.

The couple got all the way up to within 24 hours of the final rose ceremony and Peter still knew he wasn't ready to propose the next day. Eventually, this led to the most awkward non-breakup breakup in recent Bachelor franchise memory. Rachel acknowledged that even if Peter decided to propose the next day, she knew he'd only be doing it out of pressure or a fear of losing her. So, wedged firmly between a rock and a hard place, Peter and Rachel decided to leave each other behind. They didn't even really formally break up or say a big goodbye. They simply walked into different rooms and cried a lot.

During the live viewing, when Rachel and Peter reunited, she admitted that she'd been having doubts about their relationship since Geneva. She sensed that he wasn't as into it as she was and Rachel also gently pointed out that she didn't believe The Bachelorette was the right medium for a person like Peter to find love.

She said that she thought he was a person who needed more time to get to know someone and date conventionally, before he could fall deeply and certainly enough in love to make a commitment like engagement. Their reunion was brutally uncomfortable and not helped by Chris Harrison's difficult questions. Peter could barely look Rachel in the eye and she seemed irked, to put it lightly, by his lingering feelings for her and subsequent saltiness over the breakup. The word "frustrated" was used over and over again to describe how they both felt about the situation. It almost looked tense enough to make it seem as if Rachel was too torn up over Peter to accept Bryan's proposal.

In the end, though, Bryan proposed in Spain and Rachel accepted. Peter and Rachel wished each other well, but he seems far from over it.